Afghanistan proceeded to the Super Sixes of ICC World Cup Qualifiers 2018 courtesy a big favour from Nepal, who defeated Hong Kong on Monday to ensure their progress. In the first match of Super Sixes, Afghanistan are facing West Indies at Harare. Opting to bat, West Indies are 126 for 4 in 32 overs at the time of publishing this report. Nonetheless, Mohammad Nabi has already registered his name to the record books. Nabi became the first Afghanistani to claim 100 ODI scalps and took another wicket to stretch his career haul to 101.

Nabi removed Shimron Hetmyer and Marlon Samuels to dent West Indies’ progress early on. He trapped Hetmyer lbw, and had Samuels caught by Gulbadin Naib in the deep for 10. Playing his 95th encounter at present, Nabi possesses an average of 31 and an economy rate of over 4. Following Nabi in the wicket-column are Dawlat Zadran (92) and Rashid Khan (90).

Nabi will be eager to finish his spell impressively, and also contribute with the bat if need arises during the chase. He is, after all, their leading run-scorer as well. Afghanistan haven’t impressed in the initial stage of the tournament, and Nabi will want to lead the revival. 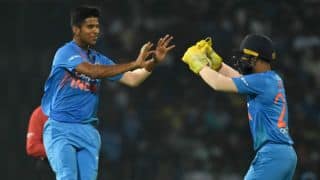 Washington Sundar: It's more about reading the batsman's mind in Powerplay 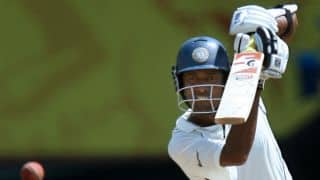