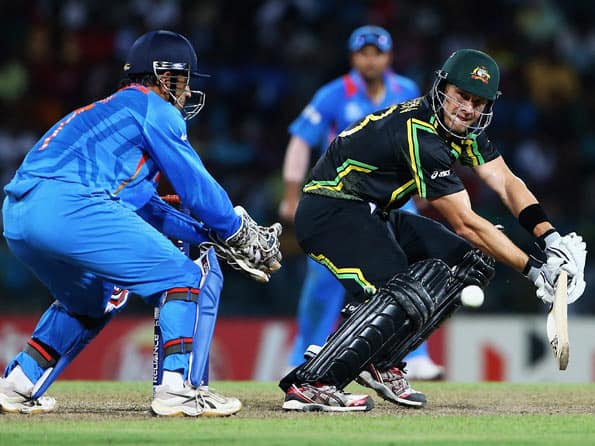 Australian pacers, led by Watson (3/34) and Pat Cummins (2/16) knocked the stuffing out of the Indian batsmen by restricting them to 140 for seven after being asked to bowl.

The highly successful openers — Watson (72) and David Warner (63 not out) then sent the bowlers on a leatherhunt as they finished the match with 5.1 overs to spare.

All-rounder Watson again did everything right as he first grabbed three wickets and then decimated the Indian attack as he hit as many seven huge sixes in his superb knock off 41 balls, fetching him his third man-of-the match award in a row.

With the able support from Warner who also took Indian bowlers to the cleaners with an unbeaten knock, the two openers literally bulldozed the Indian spin trio.

On a pitch that was supposed to assist spinners, Ravichandran Ashwin, Harbhajan Singh and Piyush Chawla were punished mercilessly by the Aussie openers who added 133 for the first wicket.

Watson who completed his 50 off 28 balls first hit Ashwin for a couple of sixes and then one by one launched into Harbhajan, Chawla and Irfan Pathan.

After the batsmen flopped, the Indian bowlers needed to bowl in good areas but did exactly opposite as they gifted one half tracker after another.

While Zaheer Khan could feel unlucky not getting a close leg-before shout against Watson, no one can take anything away from the performance of one of world’s premier all-rounders.

The demoralizing manner of defeat will also affect the net run-rate of the Indian team in case the qualifications for semi-final become close.

Earlier, opting to bat on a slowish wicket, India were found wanting against the pace of Cummins and Starc while they had little answers for Watson’s guile.

The experiment to promote Irfan Pathan as makeshift opener partially paid off as he made a scratchy 31 and was the top scorer while most of the other batsmen failed to cross 20.

Yuvraj Singh and Virat Kohli were done in by short deliveries, Rohit Sharma found pace too hot to handle.

Dhoni paid for his indiscretion. Suresh Raina (26) and Ravichandran Ashwin (16 not out) who hit a few meaty blows added 29 runs for the seventh wicket to rescue India after being precariously placed at 104 for six.

It was interesting that on a pitch which was considered to aid spinners, Australian pacers bowled with lot of fire sticking to their strengths.

Gautam Gambhir struck three boundaries before he was run-out in the third over. Cummins successfully booted the ball onto the stumps while the opener was still short of his ground. The left-hander managed only 17.

Failure is a rare phenomenon for Virat Kohli (15) these days and he started with couple of boundaries before mis-timing a pull shot of a short-pitch delivery from Cummins as Dan Christian took a well judged catch.

Yuvraj Singh has done precious little in any of the games since coming to Sri Lanka and the script didn?t change much as the Aussie pacers started peppering him with short stuff.

It was Watson again in his role of a partnership breaker sending Yuvraj and Pathan back in the dug-out in his new spell that saw India lose three wickets in a space of seven deliveries.

Yuvraj got a short ball and he wasn’t in proper position to play the pull-shot and gave a catch to Glenn Maxwell at deep mid-wicket in the very first ball of the 11th over.

Pathan fell into a trap set up by Aussie captain Bailey off the last ball of the same over. The left-hander hit two fours and a straight six off Watson.

Knowing the all-rounder?s tendency to flick anything on his pads, Cameron White was stationed at short mid-wicket exactly for that particular shot and it brought Irfan?s downfall.

Rohit Sharma who played a lovely innings against England saw Starc angle one into him and he missed the line completely to find his off-stump go for a walk.

From 70 for two at the start of the 11th over, India were suddenly reduced to 74 for five in a few balls.

Dhoni started with a streaky four when he failed to read the wrong’un from Bradd Hogg but then muscled a short ball from Watson for four as 100 came up in the 15th over.

The Dhoni-Raina duo steadied the rocking boat adding 30 runs but Indian skipper paid for his impetuosity in his desperate bid to get a move on.

Cummins bowled one fast and wide outside the off-stump and Dhoni drove uppishly only to find the cover fielder gleefully accept his offer.(PTI)