India captain Mahendra Singh Dhoni was all praise for comeback-man Harbhajan Singh, terming the spin veteran's four-wicket haul in the World Twenty20 match against England as a "brilliant one under current circumstances". 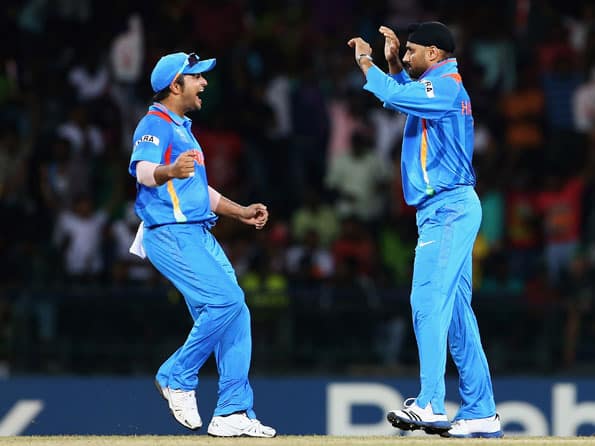 Mahendra Singh Dhoni also lavished praise on Rohit Sharma and Gautam Gambhir, both of whom have done well after considerable amount of time Getty Images

India captain Mahendra Singh Dhoni was all praise for comeback-man Harbhajan Singh, terming the spin veteran’s four-wicket haul in the World Twenty20 match against England as a “brilliant one under current circumstances”.

“I believe I have seen Harbhajan bowl better but under current circumstances, it was a brilliant performance. He was making a comeback and got a chance to prove that he is good and under these conditions, one tends to get desperate,” Dhoni told mediapersons during the post-match interaction after India thrashed the English by 90 runs.

“I would have even been happy had he got two for 24 but I believe he can bowl better,” he added.

Asked what he liked about Harbhajan’s bowling, Dhoni replied, “He (Harbhajan) didn’t bowl any short deliveries and invited the batsmen to drive. He used the variations like top spinner and doosra effectively.

“He showed an aggressive mindset and wasn’t bothered too much about field placements. He was very focused on his job,” the skipper said.

Although he was non-committal about whether he is now ready to shelve his seven-batsmen theory but there were indications enough that Harbhajan is now very much in the scheme of things.

“I would say that this problem of plenty is better than not having that one extra bowler. Obviously, I don’t know who all will play in the next game but obviously Harbhajan, with his ability to slog down the order, gives us an option of playing a batsman less,” he answered.

Dhoni also lavished praise on Rohit Sharma and Gautam Gambhir — both of whom have done well after considerable amount of time.

He said that if conditions remain the same, Rohit might again be promoted up the order ahead of Yuvraj Singh.

“I personally rate Rohit very highly but that doesn’t mean that I don’t rate Yuvraj highly. Rohit is one batsman who has all kinds of shots and is our best T20 player alongside Suresh Raina,” Dhoni said.

“Today, we got a good start and the platform was ideal to send Rohit up the order. If the situation demands and we have a 70-75 runs added in the first 10 overs, you might see him again going up the order,” he stated.

“I am very happy for Gautam as he had planned his innings beautifully. He is someone who has had to struggle a lot to play for India. He is quite an aggressive character. He is a match-winner for us.”

Dhoni clarified that both Zaheer Khan and Virender Sehwag had been requested to rest and they had agreed. He said that it’s the initial wickets provided by Irfan Pathan that set the ball rolling for the 2007 champions.

“Irfan’s two wickets were very crucial as we are a team who tend to leak a few runs in the Powerplay overs. So it becomes very important for us to get a few wickets which compensates for the runs we concede.”

Piyush Chawla, whose selection has been criticised by all and sundry, had an impressive outing and the captain seemed mighty pleased with the UP lad.

“Chawla is one bowler who has got a brilliant wrong ‘un.

He can get the batsmen with his googly if they miss out.”

Dhoni observed that playing spinners in England is easier than in the sub-continent as there are subtle but important adjustments that need to be made.

“In England, even when the ball turns, there is a lot of pace in it and one can play it easily. But in the sub-continent, the ball turns as well as stops.

“In case, one is a little early into the shot or is a little late, then there is either a slip or a short cover waiting to take that chance. But England are a team who have done well across all formats over past one year and will only improve.” (PTI)