Comeback man Yuvraj Singh provided three crucial breakthroughs but India were far from convincing as they launched their ICC World Twenty20 campaign with a scrappy 23-run victory over minnows Afghanistan. 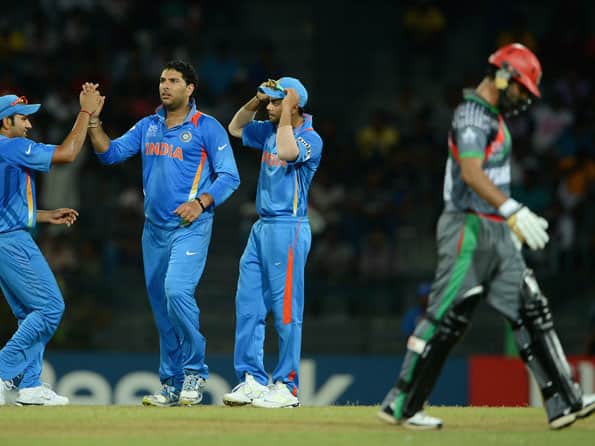 Comeback man Yuvraj Singh provided three crucial breakthroughs but India were far from convincing as they launched their ICC World Twenty20 campaign with a scrappy 23-run victory over minnows Afghanistan.

Put into bat, it was man of the match Virat Kohli’s half-century and an useful contribution of 38 from Suresh Raina which helped India reach a decent target of 159 for five in 20 overs.

In reply, Afghanistan batsmen showed patches of brilliance in their strokemaking but their sheer inexperience saw them get all out for 136 in 19.3 overs.

The bravehearts from Afghanistan can hold their heads high as they only went down after putting up a stiff resistance against a scratchy Indian team.

After getting a wicket with his very first delivery, Yuvraj in his second spell provided back-to-back breakthroughs dismissing dangerous looking Karim Sadiq (26) and Asghar Stanikzai as Afghans, from a comfortable 75 for two, were suddenly left tottering at 75 for four and never really were in the match after that.

Yuvraj’s final figures read three for 24 partly due to the couple of sixes he was hit in his final over.

It was Yuvraj and Ravichandran Ashwin with figures of two for 20 who applied pressure under which the opposition batsmen finally gave in.

Laxmipathy Balaji finished it in the end with figures of three for 19 but he was also not at his best.

But what should worry the Indians is the ease with which some of the Afghan batsmen played the Indian trio of seamers.

Mohammed Shahzad hit a helicopter shot of Zaheer Khan while Mohammed Nabi lifted him straight over long-off. The veteran medium pacer has looked completely out of sorts of late, leaking away 32 runs in three overs.

Earlier, it was Kohli’s dream run in international cricket that enabled India reach 159 for five despite poor show from senior pros like Gautam Gambhir, Virender Sehwag and Yuvraj Singh. The trio missed out on an opportunity to put up a big score under their belt before the marquee game against England.

It was mainly due to Kohli’s 39-ball 50 and some lusty blows from Raina that helped India set a decent if not an impressive target against the minnows.

Skipper Mahendra Singh Dhoni provided the final flourish ending the innings with a four and six of the last two deliveries to remain unbeaten on 18 from nine balls.

The Indians were also helped by some poor effort on the field by Afghanistan as they dropped as many as four catches ? with Raina being dropped on two occasions.

With this innings, Kohli has now completed a hat-trick of T20 international half centuries having crossed 50 against Sri Lanka and New Zealand in the two earlier international matches.

His standout shot remains the six he hit off medium pacer Gulbodin Naib. With minimum feet movement, Kohli just lifted the bowler straight and the ball traveled a distance of 93 metres.

Kohli’s partnerships of 46 runs each with Yuvraj and Raina for the third and fourth wicket respectively helped India cross the 150-run mark.

But it all started with Gambhir’s old habit of playing away from his body and it cost him dearly as he dragged back an innocuous delivery from Shapoor Zadran onto his middle stump. The left-hander made 10.

Sehwag was dismissed by a peach of delivery from Shapoor.

The ball pitched on the off-stump and moved a shade as the batsmen tentatively played at it and the resultant nick was gleefully accepted by wicketkeeper Mohammed Shahzad. He managed only eight.

Yuvraj’s first shot was a splendid one as he lifted Shapoor in a copybook manner over straight boundary. However the comeback man was not in his element today.

Once the two spinners – offie Karin Sadiq and left-arm spinner Mohamed Nabi — were introduced into the attack, Yuvraj found it difficult to score runs.

On his personal score of 17 and team’s total of 62, Yuvraj tried to scoop an overpitched delivery from Nabi but offered a return catch which the bowler failed to latch onto.

However he failed to cash in on this gift as he was soon caught by Shapoor at short third-man trying to cut a Sadiq off-break. He scored a painstaking 18 of 20 balls.

Kohli, on the otherhand, was stroking freely but did get the benefit due to profligate Afghanistan fielders

On 33, he lifted Sadiq towards widish long-on and to his delight found Shamiuallah Shenwari drop the easiest of chances.

Kohli was finally holed out in the deep immediately after he completed his 50 but Raina along with Dhoni hit some lusty blows to prop up India’s total. (PTI)

ICC World T20 2012: Afghanistan steady in pursuit of 160 against India in Group A match