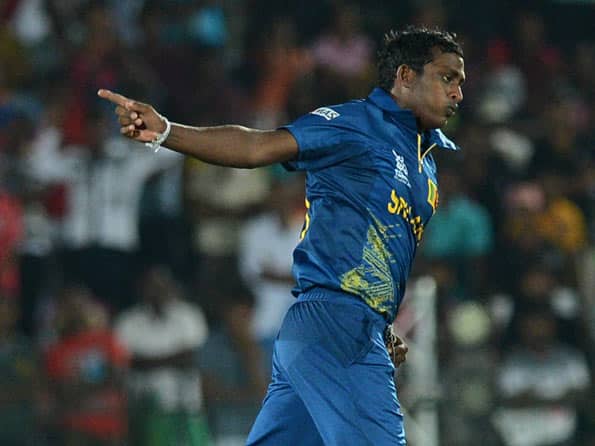 Mendis, 27, capped his return to international cricket after an eight month injury lay-off with astonishing figures of six wickets for eight runs to shoot Zimbabwe out for 100 in the Group C clash, giving Sri Lanka a convincing 82-run win.

Jayawardene said Mendis was hungry to return after a back injury.

“I am happy with the way Ajantha bowled,” said Jayawardene after the match.

“Even in the domestic tournament he came back and bowled really well. That was the indicator to see how match fit he was and how much control he had.”

Kumar Sangakkara (44) and Jeevan Mendis (43 not out) propelled the Sri Lankan innings to 182-4 after they were put into bat by Zimbabwe skipper Brendan Taylor.

Jayawardene said Mendis’s return was a boost to Sri Lanka.

“Ajantha was very keen to get back into the side and we saw that hunger in him. We wanted to make sure that he went through the processes and get his back sorted out, which is why we kept him away for this long.

“He’s comeback strongly and hopefully he’ll continue to do the job. I am sure he’ll have bad days but the quality of the player is that he’ll have more good days than bad,” said Jayawardene.

Mendis struck two crucial blows by dismissing Vusi Sibanda (11) and Taylor (0) with successive deliveries off his first over. He then bowled Hamilton Masakadza (20) in his next over, taking three wickets in his first two-over spell.

In his second spell, he took four more wickets to best his previous world record Twenty20 figures of 6-16 he took against Australia at Pallekele last year.

Jayawardene revealed Mendis was nervous before the match.

“This was his first game in eight months and he was a bit nervous before the game but he bowled really well.”

When asked whether Mendis be as effective against India and Pakistan whose batsmen play spin well, Jayawardene replied: “I’ll let you know when we have to play India or Pakistan. Right now Mendo is doing the job for us.”

Taylor admitted Mendis has always been a problem for Zimbabwe.

“Mendis has always been a knife in our side. He’s a world class performer and he showed that on Tuesday. They were just a lot better outfit and they showed why they’re one of the favourites to win,” said Taylor.

Mendis said he was happy over his contribution.

“I am very happy that my return to the team was good,” said Mendis. “This was my first game, so I was a bit nervous but the confidence given to me by my captain and team-mates helped me a lot.”

Zimbabwe play South Africa in Group C on Thursday. The top two teams from each of four groups will advance to the Super Eight stage. (AFP)