Indian captain Mahendra Singh Dhoni on Tuesday night conceded that his side did not click as a team in all departments of the game and that led to the their early ouster from the World Twenty20 at Colombo. Indian captain Mahendra Singh Dhoni on Tuesday night conceded that his side did not click as a team in all departments of the game and that led to the their early ouster from the World Twenty20 at Colombo.

Dhoni, however, said that he was satisfied with the overall performance of his side.

“We failed to click as a team. Our batting and bowling and also fielding were patchy, brilliant at different times.

But all the three departments of the game did not click together at a particular match. But overall I’m quite happy with how the team performed,” Dhoni said after India’s victory over South Africa.

“If you take the Australia game out where the rain intervened, we performed brilliantly and can’t have control over how other teams performed and how they impacted on our team,” he said.

“There were instances where we should have had 10-15 runs more on the board. We lost too many wickets early,” he added.

Dhoni said that his top-order batsmen failed often in the tournament and that was one of the reasons why the team could not post or chase big totals.

“We are team which capitalised on good starts. Often we are two or three down in the first 10 overs in this tournament. Because of that we could not capitalise after 15 overs and we ended up 10 to 15 runs less. We have some big hitters who can score 10 to 15 runs more than other teams at the end overs. But that did not happen,” he lamented.

Asked why spinner Ravichandran Ashwin was brought late in the South African innings if the aim for India was to restrict South Africa within 121 if they have to qualify for the semifinals, he said, “The plan was to get through the first six overs and then attack the South African batsmen.

“But once they were nearing 122, there was no point bringing your trump card upfront. After they crossed 122, we had to win the match and I brought Ashwin,” he said.

South Africa captain AB de Villiers was a disappointed man as he said that his side had let the country down.

“Disappointed isn’t the word to describe it, we’ve had a poor tournament. We’ve let the country down and that’s what hurts most. We did all the preparation possible, we thought we were ready but was not,” he said.

“We had the best 15 players in the country but the guys, including me, did not click. Faf du Plessis played well, he is the only shining player but unfortunately we lost and failed to qualify for the semifinals,” he added.

Man-of-the-match Yuvraj Singh said that he was happy to have done his bit in India’s win on Tuesday but disappointed that they were out of the tournament.

“I heard some people said what Yuvraj was doing in the playing eleven. But I am happy that I could take some wickets because I did not do much with the bat,” said Yuvraj who took two wickets and scored 21 runs.

“Twenty20 is unpredictable and we are disappointed that we could not qualify for the semifinals,” added Yuvraj.

Asked about his fitness level, he said, “I am fit enough to play for India and I will get even fitter if I play more and more Test and ODI cricket.” (PTI) 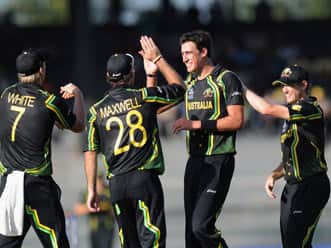 Is Virat Kohli the Sachin Tendulkar of the 1990s in Team India?