Pakistan suffered a batting collapse and were reeling at 76 for seven from 15 overs in chase of 134 against South Africa in their ICC World T20 Super Eights clash at the R Premadasa Stadium in Colombo on Friday. 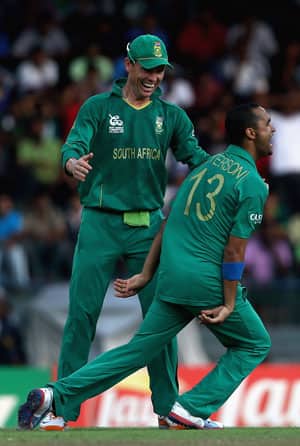 Pakistan suffered a batting collapse and were reeling at 76 for seven from 15 overs in chase of 134 against South Africa in their ICC World T20 Super Eights clash at the R Premadasa Stadium in Colombo on Friday.

Pakistan need a further 79 runs to win with six wickets in hand.

Robin Peterson dismissed Mohammad Hafeez and Nasir Jamshed in quick sucession to leave Pakistan at 31 for three from five overs, after Hafeez and Imran Nazir provided them a brisk start.

Hafeez cracked consecutive boundaries off Dale Steyn in the first over to set the tone.

Nazir too got into the groove as he picked up two boundaries off Morne Morkel in the next over of the innings to provide Pakistan a brisk start.

But their partnership was broken by Dale Steyn on the last delivery of his second over, when he had Nazir caught by Ab de Villiers for 14 off 11 balls.

Peterson provided South Africa the second breakthrough when he had Hafeez stumped by de Villiers for 15, which came from nine balls.

Pakistan slipped further when Johan Botha got rid of Kamran Akmal, who scored one.

Earlier, a gritty knock of 48 by JP Duminy was the only bright spot for South Africa, as Pakistan resctriced them to 133 for six.

South Africa made a disastrous start in the match, losing the top order cheaply against a disciplined spin attack of the Asian side.

South Africa s star batsman Hashim Amla got a lifeline in the very first over of the innings when Pakistan wicketkeeper Kamran Akmal missed a catch and a stumping chance off Raza Hasan.

But Amla s innings came to an end five balls later, when Yasir Arafat had him caught by Shoaib Malik in the second over, for eight.

South Africa suffered another jolt in the sixth over when Saeed Ajmal dismissed the dangerous Richard Levi for eight.

The African side was left reeling at 28 for three by Pakistan spinner Mohammad Hafeez, who got rid of Jacques Kallis for 12 in the seventh over to put his side on top.

Farhaan Behardien and JP Duminy then joined forces to provide some momentum to their side, but their resistance was ended by Hafeez, who had Behardien stumped by Akmal for 18.

Behardien and Duminy added 38 runs for the fourth wicket.

Duminy scored 48, which came off 38 balls, hitting two boundaries and as many sixes.

The left-handed batsmen added a further 44 runs for the fifth wicket with skipper AB de Villiers, which pushed South Africa past 100.

De Villiers scored a quick 25 with the help of two boundaries and a six off 18 balls. His innings ended when Pakistan pacer Umar Gul had him caught by Imran Nazir in the 18th over.

South Africa made one change in their side, bringing in all-rounder Robin Peterson in place of struggling Faf du Plessis.

Pakistan too made one change in their side, dropping left-arm seamer Sohail Tanvir to fit in Raza Hasan.