ICC CEO Dave Richardson admitted that the strip used for the first semi-final between Sri Lanka and Pakistan was not "ideal" for T20 cricket but mentioned that pitch preparation is a difficult task in the prevailing climatic conditions in the Island nation. ICC CEO Dave Richardson admitted that the strip used for the first semi-final between Sri Lanka and Pakistan was not “ideal” for T20 cricket but mentioned that pitch preparation is a difficult task in the prevailing climatic conditions in the Island nation.

“Ideally, we need to ensure that a pitch doesn’t change its condition from one innings to next one. Yes, the pitch used in the first semi-final wasn’t an ideal wicket for T20 format as there was too much assistance to spinners,” former South African wicketkeeper Richardson admitted on the eve of the final between Sri Lanka and the West Indies.

While Akram had accused Sri Lanka of trying to prepare a wicket that suits their spinners, Richardson tried to defend the curator saying that conditions were same for both teams.

“There was advantage for both the teams and Sri Lankan spinners took better advantage of the situation. Having said that, I spoke to the curator and he said that wicket was too dry to his liking. You have to accept that in this climate where it is so hot, to prepare a wicket is incredibly difficult,” Richardson said, sounding a bit defensive.

The CEO did admit that BCCI’s reluctance to accept the Decision Review System (DRS) is stopping them from introducing it uniformally but ruled out a chance in trying to force world’s richest cricket body into accepting technology.

“Look, I believe in having discussions when someone sits across the table voluntarily. ICC can’t run with a stick and coax them into accept technology. As of now, they have some in-principle problems in accepting the DRS and don’t look like thinking any differently. What we now plan to do is to show them the improvements that we have had regarding the Ball-Tracking and Hot Spot technologies,” Richardson told PTI.

As the discussion veered towards why India doesn’t have an umpire in the ICC Elite Panel, Richardson said situation may change since BCCI has started doing its bit on that front.

“Earlier, the BCCI was happy to see that the umpiring aspect was taken care on its own but of late they have introduced some strong steps. They have started some performance related pathways for the umpires which means if they do well, they would be elevated to the next level. I am sure the efforts will bear fruit,” he said. 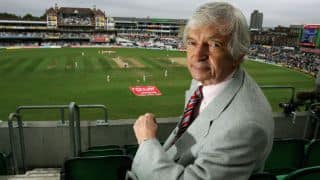 Richie Benaud: A great all-rounder and the voice of cricket

Tony Greig: The man who joined Kerry Packer to change fortunes of cricketers