Defending champions England would like to overcome the disappointment of recording their lowest-ever Twenty20 total and return to winning ways when they take on a dangerous West Indies in their opening Super Eight match of the ICC World Twenty20 on Thursday. 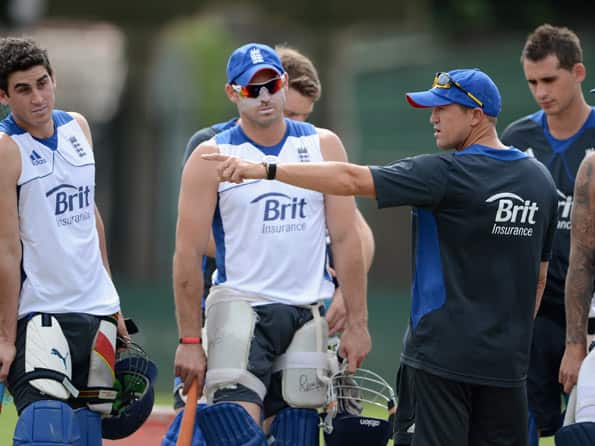 England players with coach Andy Flower during a training session, ahead of their Super Eights clash against the Caribbean side Getty Images

Defending champions England would like to overcome the disappointment of recording their lowest-ever Twenty20 total and return to winning ways when they take on a dangerous West Indies in their opening Super Eight match of the ICC World Twenty20 on Thursday.

After starting their campaign on a high with a comprehensive win over minnows Afghanistan, Stuart Broad’s men failed big time against India in their last group match.

Chasing a competitive 171-run target, England were found wanting against the turning ball as spin duo of Harbhajan Singh and Piyush Chawla ripped apart the opposition batting line-up to bundle them out for a paltry 80.

Against India, the only English batsman to show some teeth was wicketkeeper Craig Kieswetter, who scored a 25-ball 35.

English opening combination of Alex Hales and Kieswetter has been inconsistent in the tournament so far. But come tomorrow, the onus would be on them to provide a perfect launch pad against the West Indies, which comprises of a wayward opening attack.

In Luke Wright, England possesses a dangerous number three batsmen who can tear apart any bowling line-up on his given day.

Even though he failed miserably against the Indians, Wright showed his big-hitting prowess in England’s tournament opener against Afghanistan with a 55-ball 99 and skipper Broad would be banking heavily on the right-hander to produce a substantial knock again.

But come tomorrow, the task won’t be easy for the English batting line-up as in mystery spinner Sunil Narine and Chris Gayle, the Caribbeans possess a dangerous spin attack.

The Englishmen, however, can fancy their chances against an erratic West Indian seam attack, which so far has looked pretty ordinary in the tournament.

Pacer Fidel Edwards has managed to produce early breakthroughs for the West Indies in both the group matches, but he has been accused of bowling far too many lose balls.

Ravi Rampaul, on the other hand, looked pretty ordinary against the Australians but gave good account of his skills in the match against Ireland.

The rest of the West Indies pacers, including skipper Sammy, have been ineffective in the past two outings and would certainly like to make amends against England.

The return of experienced Dwayne Bravo, who missed the last match against Ireland, will certainly boost West Indies’ bowling unit.

The West Indies batting department, led by big hitting Gayle, played well to post a challenging total against a formidable Aussie attack, but they need to address their opening woes ahead of tomorrow’s game.

And the feeling is that the West Indies should open with a genuine opener like Lendl Simmons.

Just like their batsmen, the English attack also had lot to ponder about going into the match, especially after leaking 170 runs against the Indians.

Off-spinner Graeme Swann has, by far, been England’s best bowler in the tournament with figures of 2-22 and 1-17 in the two group matches.

With the Sri Lankan pitches offering considerable amount of turn as the tournament progresses, England might well play left-arm orthodox bowler Samit Patel, who is also a good hitter down the order. (PTI)