Perennial under-achievers at big-ticket ICC events, South Africa will start their campaign to shed the 'chokers' tag when they take on minnows Zimbabwe in their opening Group C match of the World Twenty20. 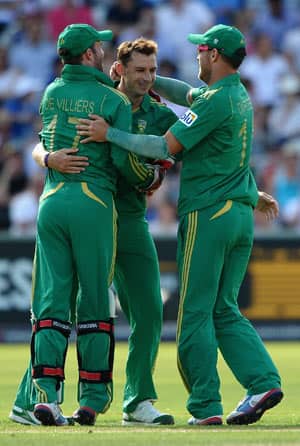 Perennial under-achievers at big-ticket ICC events, South Africa will start their campaign to shed the ‘chokers’ tag when they take on minnows Zimbabwe in their opening Group C match of the World Twenty20.

The game should not prove too much of an ask for the Proteas as it would take a very special effort from Zimbabwe after being thrashed by hosts Sri Lanka in their opening match yesterday.

On paper, it is a battle of unequals with the A B de Villiers-led South Africa looking way too formidable for Brendan Taylor‘s Zimbabwe. Whatever the department of the game, the South African stand far superior in talent and experience.

And it would be tough for Zimbabwe to bounce back from the opening-match thrashing against a quality opposition, for which winning this match would be good enough to make the Super Eight cut.

Zimbabwe’s batting completely fell apart against Sri Lanka and chasing 182, the line-up folded for 100 with four batsmen contributing nothing to the total and two others falling for single-digit scores.

But Taylor insisted that it was a one-off flopshow and his team is far better than what the scoreboard might suggest.

“We have played enough cricket to go back from today, rethink, have a good look, start training and come back a better side,” he said last night.

Zimbabwe’s bowling effort too was pedestrian to say the least with the combined might of six managing to grab just one wicket.

In the absence of that one inspiring player which almost every team banks on, Zimbabwe can hardly be given a chance to staging an upset win and go through beyond the group stage.

South Africa, on the other hand, is a team which once again looks good enough to go the distance but will have to improve their ability to handle pressure.

“I think we have definitely put certain things in place to give ourselves the best chance. We have buckled in previous ICC events, so hopefully we can go all the way this time around,” said batsman J P Duminy summing up what the under-achievers would have to do.

The Proteas seem to have adapted well posting a good warm-up win over New Zealand in which most of their key batsmen got good match practice.

The form of Richard Levi, who clinched the ICC Twenty20 Performance of the Year, would be crucial along with the ever-reliable Jacques Kallis and Hashim Amla.

They have the pace battery, led by Dale Steyn, to intimidate any opposition but it is the spin department which would be a slight cause of concern. (PTI)