With one win and a loss in their respective group games in the league stage, both Sri Lanka and New Zealand would look to sort out their weaknesses quickly and get off to a winning start when they clash in the first Super Eight match of the ICC World Twenty20 on Thursday. 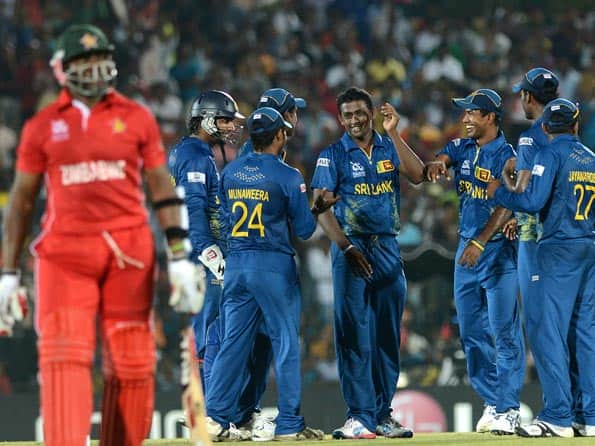 Sri Lanka will be boosted by the return of mystery spinner Ajantha Mendis, who missed the match against South Africa AFP

With one win and a loss in their respective group games in the league stage, both Sri Lanka and New Zealand would look to sort out their weaknesses quickly and get off to a winning start when they clash in the first Super Eight match of the ICC World Twenty20 on Thursday.

Sri Lanka were runners-up to South Africa in Group C, while New Zealand finished second to Pakistan in Group D after both of teams lost to strong opponents on their way to the Super Eight stage.

Sri Lanka after crushing Zimbabwe by 82 runs in their opening match of the tournament, subsequently lost to South Africa by 32 runs in a rain-curtailed seven-over-a-side game.

New Zealand, on the other hand, entered the knock-out stage after posting a 59-run win over Bangladesh, riding on Brendon McCullum’s superb 123 off 58 balls. They lost to Pakistan by 13 runs in the next match but the result had no bearing on their chances, as the net run rate was healthy enough for the Kiwis to emerge from their group.

Thus, there is very little to choose between the two sides ahead of Thursday s contest at Pallekele International Cricket Stadium.

In fact, out of the nine T20 Internationals the two teams played so far, New Zealand won five and Sri Lanka four.

Interestingly, two out of nine of those ties were staged in Sri Lanka and the Black Caps managed to win both the matches at the RPS Colombo in 2009.

New Zealand can also take heart from the fact that they would be playing at the same venue where they had played both their league games, while Sri Lanka’s two matches took place at Hambantota.

Inspite of this, the Islanders are expected to bank heavily on the home advantage.

Apart from the rain-shortened game against South Africa, most of the Lankan batsmen looked in good shape during the two warm-up matches and against Zimbabwe.

But come tomorrow, the scenario could be different as New Zealand are a quality side.

For Sri Lanka, a matter of concern is the form of opener Tillakaratne Dilshan, who has been completely off-colour, while Dilshan Munaweera also didn’t look too impressive so far at the top order and the latter might be replaced by a more experienced Dinesh Chandimal on Thursday.

The onus would be on captain Mahela Jayawardene and Kumar Sangakkara to deliver the goods with the bat. Their lower middle-order also has enough fire power with the likes of Angelo Mathews, Lahiru Thirimanne, Jeevan Mendis and Thisara Perera in the ranks.

Sri Lanka, in all probability, will be boosted by the return of mystery spinner Ajantha Mendis, who missed the match against South Africa as he was not 100 per cent fit. His figures of 6/8 against Zimbabwe is the stand out bowling performance of the tournament so far.

However, the form of Lasith Malinga, who has been very expensive in the competition till now with an economy rate in excess of 10 per over, still remains a concern for the team.

They would hope that Malinga gets his act together against the Kiwis and is well supported by the likes of Nuwan Kulasekara and Perera.

The New Zealanders, on the other hand, have looked more or less a solid side even during their loss to Pakistan in a close game. But they need to work out their opening combination.

They continued with the same combination in their first league match against Bangladesh, but chose to field Nicol and Kane Williamson as openers against Pakistan.

But with McCullum having scored enough runs in the previous encounters, captain Ross Taylor may well be tempted to start with Guptill and McCullum at the top against Sri Lanka.

Taylor’s main worry though will be his side’s inconsistent run with the bat.

Kiwi batsmen have shown lack of application and they certainly have their work cut-out against a quality Sri Lankan bowling attack.

They would hope that the likes of McCullum, Taylor, Jacob Oram and James Franklin fire in unison tomorrow.

As far as bowling is concerned, the form of veteran Daniel Vettori has been a cause of worry. The left-arm spinner didn’t look his best against either Bangladesh or Pakistan and it remains to be seen how he comes up against the Lankans.

But Kyle Mills and Tim Southee are expected to stick to their jobs for the Black Caps. (PTI)