Humiliated by Australia in their opening Super Eights match, a jittery India will have to pick up the pieces from their all-round failure and come up with an inspired performance against arch-rivals Pakistan in their do-or-die game in the World Twenty20 in Colombo on Sunday. 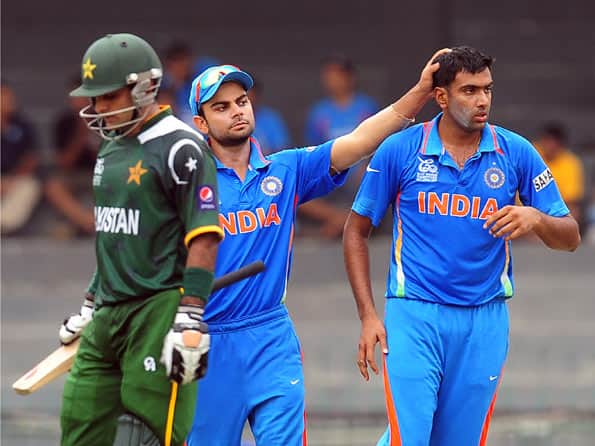 Humiliated by Australia in their opening Super Eights match, a jittery India will have to pick up the pieces from their all-round failure and come up with an inspired performance against arch-rivals Pakistan in their do-or-die game in the World Twenty20 in Colombo on Sunday.

India’s five bowler strategy was a big hit against England in the group match but in conducive conditions against Australia, Mahendra Singh Dhoni‘s frontline spinners were hammered by Shane Watson-David Warner duo in last night’s match.

Dhoni blamed the short spell of drizzle before the start of the Australian innings as a reason for his bowlers’ failure. But the fact that the entire bowling unit failed to put up a semblance of a fight came as a surprise.

From Ravichandran Ashwin to Piyush Chawla, everyone bowled half-trackers and full-tosses which proved to be cannon fodder for the two dashing ‘Ws’ of Australian cricket.

Although Dhoni may persist with his five bowler strategy, it will be very surprising if leggie Chawla gets another chance in the tournament.

Pakistan are far superior players of spin bowling and consistency has never been Chawla’s forte as he is primarily a rhythm bowler. On their day, the likes of Imran Nazir, Nasir Jamshed and Mohammad Hafeez can take Chawla to the cleaners — something Dhoni can’t afford at this juncture of the tournament.

Dhoni had suggested that “slower deliveries will be effective on Premadasa strip” which means that a bowler like Lakshmipathy Balaji will be more effective.

The Indian team also has their share of batting worries and it will be interesting to know whether Dhoni will persist with Irfan Pathan as the makeshift opener and keep Virender Sehwag out of the equation.

Sample this. The Indian batsmen in the three matches so far in the tournament have been able hit only seven sixes (four vs Afghans, one vs England and two vs Australia) while Watson alone has hit seven sixes against India on Friday.

Dhoni incidentally said at the post match press conference that “it was very difficult to justify why Sehwag was dropped”.

However, there are serious questions that need to be asked about Yuvraj Singh‘s inclusion in the team.

Largely an emotional decision by the selectors after his remarkable recovery from rare germ cell cancer, each and every passing match has been a proof of the fact that the talented left-hander needed some serious match practice at the domestic level before making an international comeback.

He has totally looked out of sorts while batting although he has somewhat made up with his bowling. Yuvraj has been quiet with the bat and that has affected India’s chances of putting up a big score against Afghanistan and Australia.

The choice between Sehwag and Yuvraj is a difficult one at the moment as both are not contributing with the bat.

But there is still an outside chance of Sehwag playing an impact innings at the top of the order but getting a 40-ball-70 from Yuvraj will be asking for too much at this stage.

Pakistan, on the other hand, would look to put up an improved batting performance as it was due to sheer brilliance of Umar Gul that they were able to beat South Africa after being 76 for seven at one stage.

Talent has never been an issue with Pakistan cricket as they have had that in abundance but consistency has been a problem.

While they employed four spinners against South Africa, they might not use rookie slow left-arm orthodox bowler Raza Hasan against India.

While skipper Mohammad Hafeez, Shahid Afridi and Saeed Ajmal are automatic choices, there is a chance that Pakistan may play Mohammad Sami who, with his raw pace, can be a bit of an enforcer.

The only problem for Pakistan has been Afridi’s sharp dip in form with the willow which at times does hamper Pakistan’s batting prospects.

Afridi’s propensity of playing high-risk-no-gain kind of strokes have always put his team in trouble and it was not an exception against South Africa.

A lot will also depend on Pakistan’s most talented young batsman Umar Akmal who on his day can take apart any bowling attack in the world.

Video: Watch a post-match analysis of India’s defeat to Australia