High-flying South Africa batsman Hashim Amla said his team was ready for their African neighbours Zimbabwe in their Group C match of the World Twenty20 at Hambantota on Thursday. 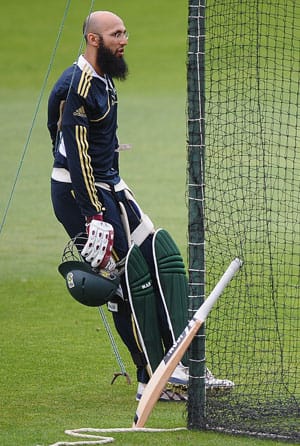 High-flying South Africa batsman Hashim Amla said his team was ready for their African neighbours Zimbabwe in their Group C match of the World Twenty20 at Hambantota on Thursday.

Zimbabwe were smarting from a big 82-run defeat at the hands of hosts Sri Lanka, with mystery spinner Ajantha Mendis registering best figures of 6-8 in all Twenty20 internationals in the tournament opener here on Tuesday.

Amla, 29, said Zimbabwe will come down hard in their last chance to stay in the tournament.

“Zimbabwe are a professional team, they must want to improve on their performance but we are coming well prepared so whatever they bring to the party, obviously we need to be better than that,” Amla said on Wednesday.

Labelled as perennial “chokers” for their slumps in major events since being readmitted to international cricket in 1992, South Africa look to end their 14-year title wait after winning the ICC’s knock out tournament in 1998.

For that, Amla thinks, a winning start was important.

“I think we need to start well, each T20 game is different and getting a victory for a good start, that’s what we are looking for. That has been our aim, fortunately we’ve had a good preparation coming here,” said Amla.

Led by the gutsy AB de Villiers, South Africa boost of a strong batting line-up with Jacques Kallis as their mainstay besides having a varied attack with Dale Steyn and Morne Morkel spearheading the pace department and Johan Botha and Robin Petersen as quality spinners.

Amla said South Africa’s recent showings in all three forms of the game has lifted their confidence.

“A lot of people have said that there are few favorites (in the event), suddenly we take confidence that we have played good cricket over the last year or so but it’s too early to tell that who the favorites are,” said Amla.

Zimbabwe coach Alan Butcher admitted his team needed a lift after defeat in the first match.

“Obviously it’s our last chance to progress in the tournament and to do so we will have to put in a vastly improved performance than against Sri Lanka, which after all the hard work was a big disappointment,” said Butcher.

“We have to pick ourselves and be positive against what we know is a very good side. We need to put in a performance we can all be proud of,” said Butcher of Zimbabwe, who crashed out of the World Twenty20 in 2007 and 2010 in first rounds.

Twelve teams competing in this World Twenty20 are divided in four groups, with the top two teams advancing to the Super Eight Stages.(AFP)