Millions of Sri Lankans on Sunday waited with stomach-churning anticipation for the country's biggest-ever home cricket match when their team take on the West Indies in the World Twenty20 final. 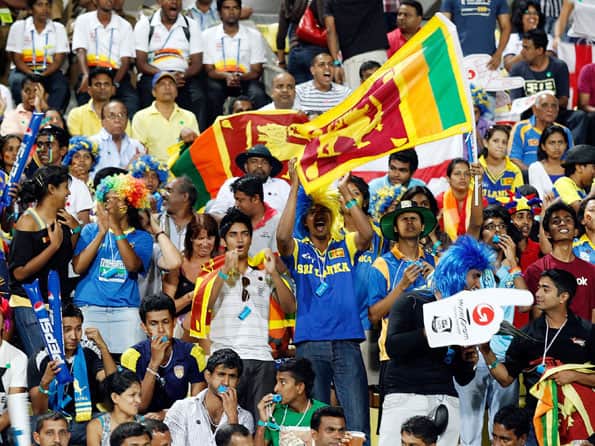 Millions of Sri Lankans on Sunday waited with stomach-churning anticipation for the country’s biggest-ever home cricket match when their team take on the West Indies in the World Twenty20 final.

Sri Lanka’s players will trigger a nationwide party if they can overcome their flamboyant opposition in a clash that starts at 7:00 pm (1330 GMT) in the capital Colombo.

A sell-out crowd of 35,000 at the Premadasa stadium will offer boisterous support as Mahela Jayawardene‘s team attempt to reverse their fortunes after losing three finals in major tournaments since 2007.

Standing in the way is the destructive West Indies batting led by opener Chris Gayle, who crushed Australia in Friday’s semi-final with a scintillating 75 off 41 balls.

“May this dream come true for Lanka,” read the headline in the local Sunday Times.

“Call it the battle of the titans or whatever you like, but today’s final… will be a blockbuster,” it predicted.

Large crowds were expected at cricket clubs where giant screens have been erected, while many families planned to gather around televisions at home to watch their national heroes.

Local media reported tickets for the finals priced at 50 US cents were fetching 75 dollars.

“We will have a house party and watch the match,” Sandamale Wickremasekera, an accounts clerk at a private radio station, told AFP.

“We were disappointed at the last World Cup, but this time we should win.”

Ahead of the match, Sri Lanka appeared quietly confident they could win their first major title since the 1996 triumph in the 50-over World Cup.

“This is definitely the biggest game we have staged,” captain Jayawardene said. “It’s been a great couple of weeks for the entire country.

“The expectations from our fans are the same as they were at the start of the tournament. They wanted us to reach the final even then. And we must now win it for them.”

“Now we are playing in the Premadasa, so we will approach it differently. We have to adapt. It is all about handling tough situations better,” he said.

Sri Lanka defeated the West Indies by nine wickets in a practice game before the tournament and again by the same margin in the Super Eights stage, but Gayle is confident of ruining the hosts’ party plans.

“We’re definitely going to rock against Sri Lanka,” the swashbuckling Jamaican left-hander said. “We know what to expect — the atmosphere, the noise and everything else.

“We are definitely going to win this trophy here. I just feel confident about it. We are up against world class players in the Sri Lanka team, but it’s going to be good fun.”

The classy Sri Lankans have lost just one of their six games in the tournament so far: a seven-overs-a-side rain-affected game against South Africa in the preliminary league.

Jayawardene has himself led from the front with 210 runs, the fourth highest run-maker in the tournament behind Australian Shane Watson (249), Gayle (219) and Brendon McCullum of New Zealand (212).

Sri Lanka will be further boosted by the match-winning form of unorthodox spinner Ajantha Mendis, who shares the top spot among bowlers with Watson at 11 wickets apiece, and sling-arm fast bowler Lasith Malinga, who has eight scalps.

Conditions in Colombo were dry during the day, with the threat of some evening showers. 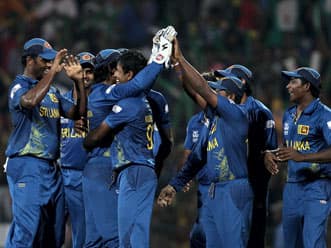