Mahela Jayawardene on Saturday struck a record-equalling sixth half century in ICC World Twenty20 as Sri Lanka brightened their semifinal prospects with a crushing nine-wicket win over West Indies in their Super Eights match. 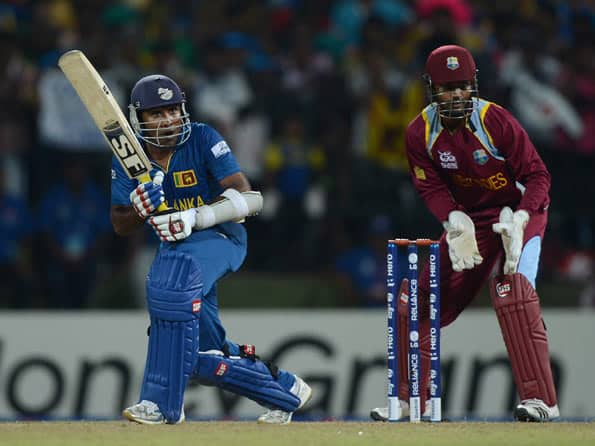 Mahela Jayawardene on Saturday struck a record-equalling sixth half century in ICC World Twenty20 as Sri Lanka brightened their semifinal prospects with a crushing nine-wicket win over West Indies in their Super Eights match.

Chasing a modest target of 130, Jayawardene struck 65 off 49 balls to guide the the hosts to victory with 28 deliveries to spare, after the bowlers set it up with a disciplined effort.

This was Sri Lanka’s biggest win in terms of balls left.

Aiding skipper Jayawardene in the chase was Kumar Sangakkara (39 off 34), and the two were involved in an unbeaten 108-run partnership for the second wicket, the highest for this wicket in the tournament.

It was always going to be a difficult task for the West Indians after they failed to make use of the first strike.

And though Ravi Rampaul had Tillakaratne Dilshan caught behind with a delivery that kicked up on landing, Sri Lanka were always on the driver’s seat as long as two of world cricket’s most experienced players — skipper Mahela Jayawardene and Kumar Sangakkara — were in the middle.

The small target gave both the Lankan veterans a perfect opportunity to play their naturally game, and they did not lag behind when it came to milking the bowlers.

Anything pitched on the pads were promptly flicked over the midwicket and the squareleg fence, the wayward ones outside off were slashed over point while the short balls were pulled behind square.

And there was also a premeditated reverse sweep four by Jayawardene off Sunil Narine.

The two experienced campaigners took centrestage after Dilshan got the hosts off to a rollicking start, smacking three consecutive fours off Fidel Edwards.

The right-handed opener’s onslaught not only disturbed Edwrads’s rhythm, it also pushed the West Windies back straightaway.

Wile Jayawardene struck 10 fours and a six, Sangakkara had five hits to the fence.

Mystery spinner Ajantha Mendis led the way with measly figures of two for 12, in the process reaching the 100-wicket mark in T20 cricket.

There was a wicket apiece for Nuwan Kulasekara, Jeevan Mendis and Angelo Mathews.

Marlon Samuels was the West Indies’ top scorer with a 35-ball 50, while Dwayne Bravo contributed 40 off 34 deliveries.

The West Indies’ decision to bat first backfired as the Sri Lankans kept them on leash throughout the 20 overs at the Pallekele International Cricket Stadium.

The hosts had their first breakthrough when Ajantha had Charles Johnson stumped by Kumar Sangakkara with the final delivery of the fifth over.

But the bigger for the Windies was losing dangerman Chris Gayle, who, after a frustrating stay at the crease, slashed at a wide delivery by Kulasekara only to offer a diving catch to Sangakkara.

Bravo and Samuels tried to revive West Indies’ innings with a 65-run third-wicket stand — the highest for this wicket between the two teams.

But as the duo sought to settle down, the visitors lost two more wickets in the form of Bravo and Kieron Pollard.

While Bravo was done in by legspinner Jeevan Mendis, Ajantha sent back Pollard with a quicker one to reach his 100th wicket in this form of the game, including domestic competitions.

At this stage, West Indies badly needed big hitters to prop them up, and they found their men in Samuels and Andre Russell (19 off 14 balls), who produced a few effective blows towards the end. (PTI)

Click here to watch the video of the post-match review