Statistical highlights of the Super Eights match match between Sri Lanka and England at the ICC World Twenty20 at Pallekele on Monday. Statistical highlights of the Super Eights match match between Sri Lanka and England at the ICC World Twenty20 at Pallekele on Monday.

# Samit Patel and Graeme Swann have shared an eighth-wicket stand of 51 – the second highest in the ICC World Twenty20. Michael Hussey and Mitchell Johnson for Australia had put on 53 (unbroken) against Pakistan at Gros Islet on May 14, 2010.

# The above eighth-wicket partnership is the highest for England in T20Is.

# Patel’s above innings is the second highest for England against Sri Lanka in T20Is. Marcus Trescothick had scored 72 off 58 balls at Southampton on June 15, 2006.

# Lasith Malinga is the first bowler to register a five-wicket haul against England in Twenty20Is.

# Malinga (5 for 31) has recorded his best ever bowling figures – his first five-wicket haul. He is the second Sri Lankan bowler after Ajantha Mendis (6 for 8 against Zimbabwe at Hambantota on September 18, 2012 and 6 for 16 against Australia at Pallekele on August 8, 2011) and the eighth to take five wickets or more in a T20I.

# Malinga’s above figures are the third best in the ICC World Twenty20. Ajantha Mendis had claimed 6 for 8 aainst Zimbabwe at Hambantota on September 18, 2012 and Umar Gul’s 5 for 6 against New Zealand at The Oval on June 13, 2009.

# Malinga has been named the Man of the Match for the first time in T20Is.

# Stuart Board (3 for 32) has registered his best bowling figures against Sri Lanka in Twenty20 Internationals .

# Graeme Swann (34) has posted his career-best innings in T20Is. His innings is the highest individual at number nine, bettering the 33 not out by Irfan Pathan against Sri Lanka at Colombo (RPS) on February 10, 2009.

# Sri Lanka have become the second nation after Pakistan to reach the semi-final stage of the ICC World Twenty20 three times.

# Sri Lanka’s excellent 19-run win is their third in four games against England in T20Is – winning per centage 75.00.

# Sri Lanka (169 for six) have posted their highest total against England in T20Is.

# Graeme Swann is the first bowler to complete 50 wickets for England in Twenty20 Internationals – his tally being 51 at 16. 84 runs apiece in 39 games. 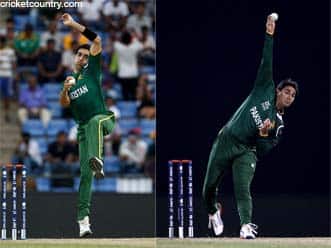 Ajmal, Gul are a potent force, but may not be enough to stop Australian juggernaut