West Indies skipper Darren Sammy was all praise for his bowlers, especially Sunil Narine, saying the mystery off-spinner brings "quality to the side". 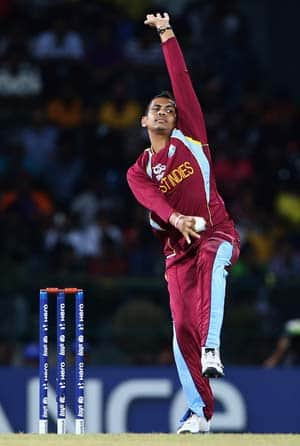 West Indies skipper Darren Sammy was all praise for his bowlers, especially Sunil Narine, saying the mystery off-spinner brings “quality to the side”.

“Sunil is someone who brings quality to the side. We can use him anytime, during the powerplay, in the middle overs and at the end of the innings. It depends on the situation. He can come and bowl anytime, that’s his quality,” said Sammy after his side advanced to the Super Eights of the ICC World Twenty.

West Indies entered the Super Eights by virtue of superior net run-rate after their final group league encounter against Ireland was called off due to heavy downpour at the R Premadasa Stadium at Colombo on Monday.

The Caribbean side will take on England in their first match of the Super Eights and going by the holders’ failure to deal with spin, Sammy said Narine could be more than a handful in the subcontinent.

“I saw their (England) game against India on Sunday. It’s good for us and it would be the first time that England will be playing him (Narine) where conditions offer him some assistance. Last time when we played in England, the wickets were not friendly to Narine. We know that on a turner, he can be very handful,” Sammy said.

The West Indian skipper said they fancy their chances against England.

“It’s a very important game for us. We do fancy our chances against them. We watch them play last night, we have enough footage on them. Judging from what we saw the other day, we have got some quality spinners and I am confident that they will play their part in the match against England.”

“The guys bowled really well on Monday. Ravi Rampaul and Fidel Edwards upfront with the new ball and Narine and me keeping it tight in the middle. We just need to continue improving as the tournament progresses.”

Sammy said they need to start afresh heading into the Super Eights.

“Now that we have qualified, we need to start again and think it from the very first game.”

“We lost the momentum after the drizzle. It’s disappointing, we have to go back home. It would have been nice to see yourself in the Super Eights,” he said.

“The build-up before the tournament was good, we had enough match practice. It was all positive. The loss against Australia in the first game was disappointing.”

“First of all, happy to go through the Super Eights. It’s not the way we would have liked to but you can’t control the weather.

We are very happy to go through the next round.

Hopefully, we can do better in the Super Eights and reach the semifinals,” he said.

Gayle, who did an impromptu jig that resembled ‘bhangra’, after taking the wicket of Gary Wilson, said, “You will see more of it in the tournament. I’ll promise to show more as the tournament progresses. It’s a good dance and I really enjoy it.” (PTI)