Pacers Doug Bracewell and Tim Southee came up with superb bowling efforts as New Zealand bundled out West Indies for a lowly 139 in their Super Eights match of the ICC World Twenty. 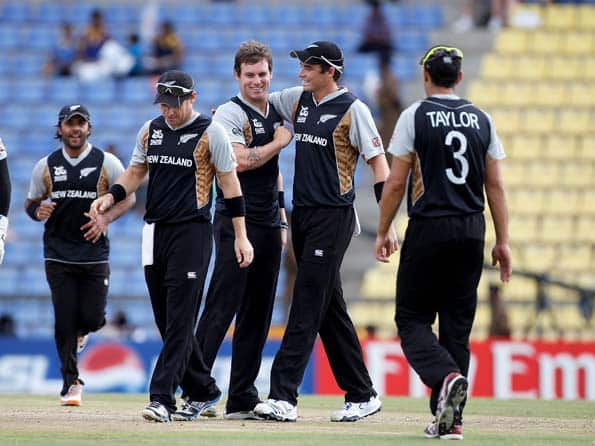 Doug Bracewell (C) is being congratulated by New Zealand players, after he got rid of the explosive Chris Gayle Getty Images

Pacers Doug Bracewell and Tim Southee came up with superb bowling efforts as New Zealand bundled out West Indies for a lowly 139 in their Super Eights match of the ICC World Twenty.

New Zealand’s decision to field first produced the desired result as the Kiwi bowlers managed to frustrate the opposition batsmen throughout. Southee (3/21) and Bracewell (3/31) claimed three wickets each, while Nathan MuCullum took two for 19 to end Windies’ innings in 19.3 overs.

West Indies lost opener Johnson Charles early and during his brief stay in the middle, he scored a nine-ball eight with the help of two fours before Bracewell caught him off his own bowling.

Chris Gayle then turned the heat on the Kiwi bowlers in the third over when he struck Kyle Mills for a six and two fours to churn out 16 runs from that over.

New batsman, Andre Russell also showed much promise as he straightaway got down to business hitting a six, but in the very next ball Bracewell dismissed him to add another wicket to his kitty.

Gayle continued in the able company of Marlon Samuels.

But Southee forced the dangerman Gayle to nick a ball to be caught behind by Brendon Mccullum.

Gayle departed for a quickfire 30 off 14 balls, studded with three fours and two sixes.

Samuels and Darren Bravo (16) carried on the momentum before the former also fell for 24 from 22 balls.

Even as West Indies managed to maintain their run-rate till the 12th over, wickets at regular intervals did not help their cause.

After Bravo and Kieron Pollard (22-ball 28) got out, West Indies lower order simply fell like a pack of cards. Only Captain Darren Sammy (11) tried to make an effort. (PTI)