Virat Kohli and Rohit Sharma struck quickfire half-centuries to power India to 185 for three against arch-rivals Pakistan in their second warm-up game ahead of the ICC World Twenty20. 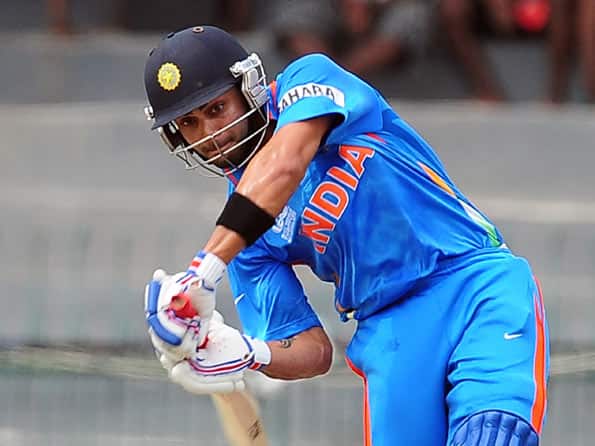 Virat Kohli and Rohit Sharma struck quickfire half-centuries to power India to 185 for three against arch-rivals Pakistan in their second warm-up game ahead of the ICC World Twenty20.

Off-spinner Saeed Ajmal was the most successful Pakistani bowler with figures of two 22 from his four overs.

Electing to bat, Gautam Gambhir (10) and Virender Sehwag (26) stitched 41 runs for the opening stand before the former was cleaned up by Umar Gul in the fifth over.

To make matters worse for India, the dangerman Sehwag departed in the next over after being unable to keep a cut down. He was caught by Shahid Afridi off Ajmal’s bowling.

But then came the in-form Kohli and Sharma, who combined together beautifully to raise the century stand, which laid the foundation of India’s score.

The duo, however, started cautiously before opening up.

Both Kohli and Sharma initially started with ones and twos but didn’t waste any single opportunity to hit boundaries and sixes when opportunities came their way.

They were especially severe on leg-spinner Shahid Afridi who gave away 41 runs from his four overs.

Afridi gave away 15 runs off his final over, courtesy a four by Kohli and one six and a boundary from Sharma’s willow.

Not only Afridi, other Pakistani bowlers too had to bear the brunt of Kohli and Sharma’s destructive moods as the duo scored boundaries and sixes at will towards the business end of the innings.

The duo, however, brought up their half centuries in contrasting fashion. While Kohli struck a boundary to notch up his fifty, Sharma found the landmark with a single.

The century-stand partnership between Kohli and Sharma finally ended in the 19th over when Ajmal went through the later’s defence, but not before the duo had already inflicted serious damage on Pakistan.(PTI)