Sammy said Samuel Badree and Sunil Narine would pose a challenge for the rival team.

West Indies captain Darren Sammy has expressed confidence that his team can defend the World Twenty20 title and achieve what no other team has done in the history of the tournament.

The West Indies, which is famous for playing a cavalier brand of cricket, won the fourth edition of the World T20 in Sri Lanka in 2012, and is now just two matches away, including their semi-final against Sri Lanka, from defending it.

According to Sport24, Sammy said that his men had left the Caribbean with the motivation to make history by winning the tournament for the second time, adding that they are confident that they can achieve that if they maintain the same brand of cricket from the rest of the event.

Meanwhile, Sammy dismissed Sri Lankan spinner Rangana Herath, who took an astonishing 3 for 5 against New Zealand in Chittagong, being a concern for his side and backed Chris Gayle and Dwayne Smith to ‘go hard at the top’ against Herath and other Sri Lankan bowlers.

Sammy also said that his spinners Samuel Badree and Sunil Narine, who are ranked one and two in international T20 rankings, would also pose a challenge for the rival team.

The report mentioned that India won the inaugural World T20 in 2007, before Pakistan clinched the second tournament in England two years later, following which England won the third tournament, held in the Caribbean in 2010. 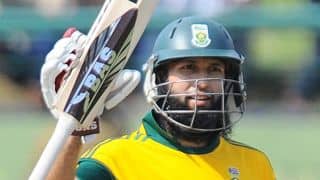