England had also lost to the Netherlands in the 2009 World T20 tournament.

Former England captains Michael Vaughan and Michael Atherton rounded on the current side after they bowed out of the World Twenty20 with a humiliating 45-run loss to the Netherlands in Chittagong on Monday.

Bowled out for just 88 with more than two overs to spare in reply to the Netherlands‘ 133 for five, defeat set the seal on a miserable tour programme for England, already unable to reach the semi-finals of this event, following their 5-0 Ashes series loss in Australia.

Early in the match, former batsman Vaughan told his Twitter followers: “I have a feeling this could be an embarrassing sort of day.”

But it arguably proved worse than even Vaughan forecast, with only three England batsmen making double figures — Ravi Bopara ‘top-scoring’ with a meagre 18 — in an innings featuring just four fours and no sixes.

And after England’s innings ended in the 18th over with a farcical run-out, Vaughan tweeted: “That sums it up…. #Garbage”.

This defeat was worse than England’s Lord’s loss to the non-Test Netherlands at the 2009 World Twenty20, a clash that at least went to the last ball.

Referring to that match, and the ‘minnows’ traditional bright orange shirts — colours adopted by England this tournament — Atherton said: “[England have been] tangoed again. Unbelievable.

“This is a team that is totally shot of confidence,” the former opener added.

“This has now been a six-month period, from the start of the Ashes….and this is a team absolutely devoid of confidence.

“This was bad — total disintegration in the Ashes, and a lack of improvement in the one-day game as well.”

“We have been diabolical all winter….we can’t get any worse than this,” Lloyd said. “Brainless, shameful, totally unacceptable.”

Monday’s defeat did little to enhance the prospects of England limited overs coach Ashley Giles taking over as head coach following Andy Flower‘s decision to step down after the Ashes thrashing.

But former England left-arm spinner Giles insisted he was still the right man to take the side forward.

“I believed I was 24 hours ago, and I’m not sure that one performance has changed my mind,” he said.

“You get bad days at the office, and this is a really bad one….but I still believe I can do the job for England.”

And England selector Angus Fraser, who is not on the panel to chose Flower’s replacement, came to Giles’s defence by saying: “I do feel for Ashley. He’s a good man, and I like his values — the standards, the things he tries to do and the way he conducts himself.

“He’s had success with Warwickshire, so he’s proved that he can put a team together,” added the former England seamer, now Middlesex’s director of cricket.

“Days like today … are not helpful,” said Fraser. “I’m not on the panel, but I think those people will know his [Giles’s] qualities and will back him to be able to get through something like this.”

Giles also received support, of a rather more grudging variety, from leading British bookmaker William Hill, who even after Monday’s defeat still made him the 4/6 favourite to succeed Flower.

“England cricket is a shambles at present and apart from Ashley, we cannot see anyone else wanting the job,” said Hills spokesman Rupert Adams. 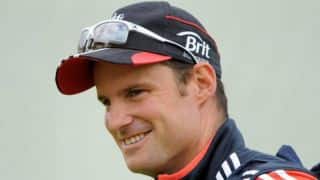