This was the first time that an Indian team had a training session without wearing their shoes.

Football remained pretty much a part of Indian cricketers’ training stints but what was unusual was that they played barefoot, the hour-long leisurely session reflecting the team’s new-found confidence following its qualification to the ICC World T20 2014 semifinals.

They trained at the BCB Cricket Academy ground, three days ahead of their last-four clash against South Africa. It was the first time that an Indian cricket team was having a full training session without wearing their sports shoes.

After the end of the session, senior cricketer and hero of last match, Yuvraj Singh, was seen limping but the seriousness or extent of pain was not known.

Yuvraj normally wears knee braces during training but his left ankle was protected by a crepe bandage as he walked towards the team bus.

Asked about Yuvraj’s condition, Indian team’s trainer Nitin Patel said, “Why are you asking me? You know I am not supposed to answer any questions.”

From a viewer’s point, the training was something different. If you hail from West Bengal or Bangladesh, watching some of the megastars playing barefoot would certainly add a local flavour and force one to take a trip down memory lane.

No wonder, the best footballer on the park was skipper MS Dhoni, someone who could effortlessly use the inside and outside dodge, chip the ball while taking a free kick. Dhoni’s childhood has been spent in MECON quarters in Ranchi and he has played football for DAV Shyamali. His game-sense is certainly a cut above his teammates.

When someone asked the reason for playing barefoot, Dhoni said with a straight face, “Paise khatam ho gaye (We don’t have any money left)”.

It’s learnt from team sources that trainer Sudarshan had suggested the idea so that the players break the monotony. 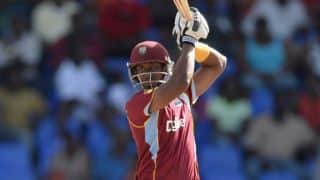