In the space of10 balls, Dhoni hit Mishra for six sixes and four fours.

There was a feeling of déjà vu as Indian captain MS Dhoni took Amit Mishra to the cleaners during a net session, much like former skipper Sourav Ganguly would do with Murali Kartik a few years ago.

In 10 balls during a particular phase, Dhoni hit Mishra for half a dozen sixes and at least four boundaries which could qualify as near-about maximums.

The manner in which Dhoni hammered Mishra into submission could be a reason as to why the skipper is reluctant on inducting the portly Haryana leggie into the playing XI.

Ganguly, in his heydays, was brutal on left-arm spinners.

Many believe that it is precisely the reason Kartik’s Test career ended with just eight matches between 2000 and 2004 as the ‘Prince of Calcutta’ never faced any problems while facing him at the nets.

Ganguly had on numerous times clobbered Kartik in domestic matches and with Anil Kumble and Harbhajan Singh in his ranks, Ganguly never considered Kartik a good enough option in either domestic or foreign conditions.

One felt the same while watching Dhoni bat against Mishra when the Indian team trained ahead of their World T20 warm-up game against England.

A few were hit towards the cow corner while some were clear straight hits and a few lofted in the region between deep extra-cover and long off.

Not even once was Mishra successful in troubling Dhoni.

While he hadn’t batted during the last net session and also during the first warm-up game yesterday, there was no rustiness as he took on both pacers and spinners with aplomb.

Most of the players looked jaded in the sapping afternoon heat. One of the senior batsmen, while returning to the pavilion, said that it’s unbearable out there in the middle.

While the Indian team was training at the Outer ground of the Khan Saheb Osman Ali Stadium, West Indies were gearing up to take on England in their opening warm-up game in the main stadium.

With Chris Gayle in action, at least 5000 odd spectators had come with tickets worth Rs 25 and Rs 50. He didn’t disappoint people of this little town on the outskirts of Dhaka, hitting a 38-ball 58 with six fours and two sixes. West Indies cantered home by seven wickets.

Gayle was the centre of attraction even as the world’s richest set of cricketers were training at the adjacent ground.

India has reverted back to their grey coloured jersey and black lowers from the yellow jersey which apparently has been discarded for the time being. Only Varun Aaron and Ravichandran Ashwin were given rest. 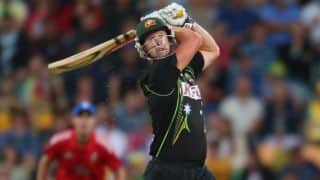