MS Dhoni went on to say that his team’s performance has been good.

India have stunned everyone by winning all their four games at the Super 10s of the ICC World T20 2014. With the comprehensive 73-run victory over Australia on Sunday, India move into the semi-finals with a lot of confidence. Skipper Mahendra Singh Dhoni is happy with his team’s performance and stated that the mood in the camp was upbeat even when his side was struggling in the lead-up to the tournament.

Speaking to the media after the victory over Australia, Dhoni said, “The mood in the camp is good. It was good even when we were not doing well. We have to think practically. The conditions over here are very different. It is like saying you take 18 hours to go to New Zealand and 40 minutes to go to Bangladesh. The conditions are entirely different, the challenges are different. Over here, spinners have something to bank upon. The ball doesn’t come on to the bat nicely, they [spinners] can exploit the conditions which wasn’t the case when we toured South Africa or New Zealand.”

Dhoni went on to say that his team’s performance has been good and is also happy that ismiddle order was tested. With India facing modest totals in their first three games, the top order knocked it out without too many worries. But, against Australia they were 66 for four in the 12th over, when Dhoni and Yuvraj turned the game.

“It is a completely different scenario, you can’t really compare. So, I would talk about the performance over here. It has been good. Even the last T20 World Cup we participated, I thought overall the performance was good, apart from that one game where we lost badly to Australia. Now that the whole of the middle order is tested, I have one less question to answer in the press conference. Overall a good performance today,” Dhoni said.

In the three previous games, India bowled first, but now they were put in to bat by the Aussies. “We wanted to bat first in this game. Once we lost the toss, it wasn’t really in our control. Very happy that we were able to bat first and set the target. The middle order was tested. We lost a couple of wickets and it wasn’t really coming on to the wicket. It was slightly difficult for the batsmen to rotate. That is the kind of scenario we may encounter in the coming games,” Dhoni said.

Speaking about the nature of the game, Dhoni said that it isn’t easy to judge with the conditions at Mirpur. The track is slow and the spinners come into effect in the middle order. “It is difficult to judge in T20 cricket. In these conditions it is even more difficult because the game can change in the middle overs. You can never think that you have won a game or lost it. Every team have players who can win games single-handedly,” Dhoni said. 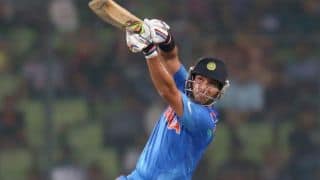