The Tamil Nadu tweaker feels he is "at the top of his game" currently.

Claiming to be at the top of his game right now, Indian off-spinner Ravichandran Ashwin on Thursday said he is not bothered by competition breathing down his neck as his endeavour is to improve himself.

“To be really honest, I’ve never bothered about who’s behind my shoulder. That’s not how I play my cricket. I believe in improving every day, and I don’t say it just for the sake of it,” Ashwin replied on being asked about competition from leg-spinner Amit Mishra.

“Unless you don’t keep improving, you’re not going to last the distance. You lose out. It’s pretty much like a business model, that’s how I view it. Somebody’s behind my shoulder? They can stay there. I’ll just keep doing what I do best,” he added.

Having got two man-of-the-match awards in last two matches, the Tamil Nadu tweaker said that he is “at the top of his game” currently.

“In the last two or three months, I feel that I’m probably at the top of my bowling game. When I reach that phase, I pretty much don’t practise at all. That’s a phase I’m in right now. The ball is landing exactly where I want it to land,” he said.

Playing alongside Mahendra Singh Dhoni at Chennai Super Kings has certainly helped him as the skipper knows his style of bowling inside out.

“It’s not about what I’m doing or where I’m given the ball. I’ve been playing alongside Mahi for some time, and he probably knows where to use me and where not to use me. I’m always open to bowling in any situation, so for me it doesn’t make any difference.”

Talk about going into a knock-out match against South Africa on Friday, Ashwin said pressure will be on the Proteas.

“Most of these guys [Indian team] are involved in the Champions Trophy, so that’s one experience everybody can draw from. Apart from that, the one thing that the young side will have an advantage over the other teams, is that we don’t carry any baggage [of failures]. We’ve not lost big competitions, there will be no scars with us. We have nothing to lose,” he said.

“We never walked into this tournament as favourites, and we wouldn’t want to be tagged as favourites. We just go in and enjoy ourselves,” he added.

Ashwin was asked if he believes ‘Law of Averages’ would catch up with the team after an unbeaten run in the group stage, pat came the reply, “When I was a fan, yes I believed, but not now.”

Ashwin believes that there is very “little difference in quality” between the spinners across the countries but it is the mental make-up that separates the top men from the rest.

“When it comes to international cricket, there’s a very small margin between the quality of spinners. Everybody’s bound to have a certain amount of quality in them. It’s all about the mental make-up of the spinner and what amount of guts he has in that particular scenario.”

“I expect Phangiso to play. When that happens, you’re pretty much evened out on the amount of spinners both teams will play. It comes down to how well your spinners handle it,” he said.

Ashwin also was not ready to put in too much thought into what inputs Shane Warne might have provided to the South African spinners while attending their net session yesterday.

“I don’t know what the South African management called him [Warne] for. Probably, he could add value in terms of what he can do to a spinner. Probably, Tahir could learn something from him. We’re just going to be guessing from a far distance, so we can’t really say how much of a difference he can create,” he sounded pretty unsure.

He also sounded confident about sorting out opposition captain Faf du Plessis, who has been his teammate at the Chennai Super Kings.

“I know Faf pretty well, I know the way he bats, I know his strengths. I can only prepare for what I’m going to do against Faf, rather than looking at the totality, just knowing what he does against the spinners.”

Although he did not comment on whether India are peaking at the right time but he did admit that they have a good chance to win the trophy.

“Pretty much all through the year we’ve been playing cricket. You cannot be at the top all tournaments of the year. You can go off the boil, up and down, here and there. But when you start a tournament off so well and you go through the big phases, we like to think we are in with a good chance of peaking at the right time.”

When a British journalist asked whether the team is talking about triple crown, he said, “We’ve never been a team that’s believed in talking about all these things, because it’s only going to make things tougher for you. I’m not a firm believer in it, but four teams in the semi-final, everybody has a 25 per cent chance. That’s the numbers game.” 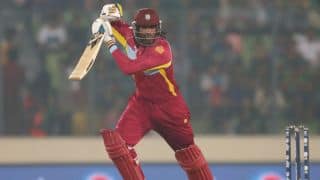