Anurag Thakur, who is also the BCCI secretary, has said it would be "very difficult" to shift the proposed match from Dharamsala at this stage.

Shimla: The Congress in Himachal Pradesh on Monday slammed Indian cricket board secretary and BJP MP Anurag Thakur for double-speak on the issue of holding the ICC World Twenty20 2016, India-Pakistan match in Dharamsala, saying he had earlier opposed any cricketing ties with Pakistan. Quoting Thakur’s tweet last year — Dawood in Karachi. Are you really serious about peace and you expect we’ll play cricket with you? — state Congress chief Sukhvinder Sukhu asked Thakur what had happened now that made him change his stance. Sukhu said that on one hand, the Bharatiya Janata Party talks of nationalism but on the other, its leader Thakur is trying to justify the March 19 match in Dharamsala, some 250 km from the state capital. READ: BCCI to assess DDCA preparations for ICC World T20 2016

Thakur, who is also theBoard of Control for Cricket in India secretary, has said it would be “very difficult” to shift the proposed match from Dharamsala at this stage. Chief Minister Virbhadra Singh has already advised Thakur to sort out the issue of security for the match with the agitating families of martyred soldiers, who are settled in Dharamsala in Kangra district, before the match.

Ex-servicemen League’s state chief Vijai Singh Mankotia refused to relent on the opposition to the match. “Terror and T20 cannot go together. There is no give and take in this issue. It’s a question of sentiments of the soldiers, the families of martyrs and ex-servicemen,” the former Congress minister said. READ: India vs Pakistan, ICC World T20 2016 match at Dharamsala will be played as per schedule: Anurag Thakur

“Sentiments are flared. The match venue should be shifted. We are meeting on March 10 to discuss the issue again,” Mankotia said. Leaders of both the ruling Congress and the opposition BJP in Himachal Pradesh are united in their opposition to the Super 10 Group 2 match between India and Pakistan, keeping in mind the local sentiments against Pakistan.

While the chief minister has in a letter to union Home Minister Rajnath Singh asserted that the state government will not be able to provide security for the game, former chief minister and BJP leader Shanta Kumar wrote to Prime Minister Narendra Modi that the match should not be allowed in Dharamsala since it was home to hundreds of valiant jawans, families of martyrs and ex-servicemen. 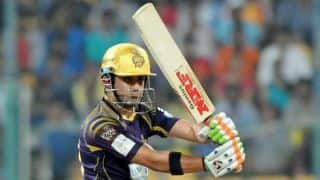