There were couple of reasons for BCCI being wary of giving any matches to Chepauk.

New Delhi: The MA Chidmabaram Stadium (Chepauk) in all likelihood will get a go-ahead from the Board of Control for Cricket in India (BCCI) as well as International Cricket Council (ICC) in their bid to host matches of the ICC World T20, scheduled to be played in March-April, 2016. There were couple of reasons for BCCI being wary of giving any matches to Chepauk. Primarily, the three empty stands I, J and K for which the Tamil Nadu Cricket Association (TNCA) has not got clearance certificate as they don’t comply to the norms. According to CMDA (Chennai Metropolitan Development Authority) norms, the gap between two stands should be eight metres, which currently is 5.4 metres.
The second reason is that Sri Lankan team cannot play in Chennai. However it has been learnt that the BCCI will not strip Chepauk from the list of venues as they feel that having three empty stands will not be a problem. “We have now had IPL matches as well as international matches at the Chennai for years with three empty stands. I don’t think three empty stands will stand in the way of Chepauk being not allowed to host the match. There are no ICC norms regarding empty stands,” a senior official close to BCCI president Shashank Manohar told PTI today.

It was also learnt that the investigations into the ‘Snoopgate’ by the two-member committee of Ajay Shirke and Gokaraju Gangaraju has just started. “They have just started with their investigations and one of the links of the ‘Snoopgate’ is in the United Kingdom. So the two-member committee will take its own time before coming to a conclusion,” said the source. READ: Chennai floods: N Srinivasan donates Rs 2 crores 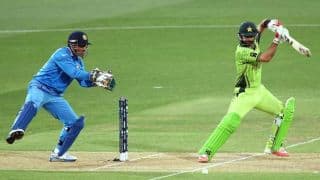