Kolkata: Cricket pundits have generally been rating India as the favourites to win the upcoming ICC World Twenty20 2016. Australian all-rounder Mitchell Marsh acknowledges that the hosts are a great side, but feels they would be under pressure in a tournament where any team can beat the other on their day. “Certainly we have to go past India, they are playing well, they know the conditions well, won the 50-over World Cup here a few years ago, so there is going to be a lot of pressure on them and they are a great side. ALSO READ: ICC World T20 2016: Mitchell Marsh says Australia high on confidence of doing well in India

“But at the end of the day it’s a game of 20-20 and is a matter of who turns up on the day and anyone can beat anyone, that’s the nature of the tournament,” the 24-year-old Marsh told the media here on Saturday.

Marsh, who has turned out for Deccan Chargers and Pune Warriors in the Indian Premier League, said his team was high on confidence about doing well in the World T20 as several players in the dressing room have rich experience about the Indian conditions.

“There are some players in the dressing room who have the experience of playing in India. Several of them have had individual successes in India at some point of time. We are high on confidence of doing well in India, where the conditions can be challenging.”

The Western Australia player has been a regular for his country over the past year and says he was looking forward to the Indian challenges. He was also all praise for India’s young pacer Jasprit Bumrah. “He is a very good bowler. I saw him two years ago. He bowls with a good change of pace.”

Asked about his role as a finisher in the T20 format, Marsh said, “I try to hit as many balls as I can. It’s about being flexible. You can’t get 30 of ten balls every match. I try and keep it simple. I have prepared for the flat kind of wickets we will encounter here.”

Marsh said his ability to send down the slower ones has added more depth and variety to the side’s bowling. “Variations in bowling is important, you need to mix things up bow slower deliveries, as a bowler I will look to work on the area of. The great thing about our side is we have got so many options with the ball, got seven or eight guys who can bowl.”

Marsh comes from a family of sportspersons. While his father Geoff Marsh had played 50 Test matches and 117 One Day Internationals (ODI) for Australia, brother Shaun Marsh is also an international batsman, while his his sister Melissa is a basketball player.

To a poser as to how much of cricket is discussed at home on the dinner table, Marsh replied: “Probably the first 10 minutes and then we go back to more family issues.” Marsh also spelt out how he benefits from his father’s advice.

“Yes certainly, I am very lucky to have a father who played 50 Tests and 117 ODIs, obviously his experience is vast, but at the same time he is my father, so be it cricket or life , I go to him for advice. I am lucky to have him.” 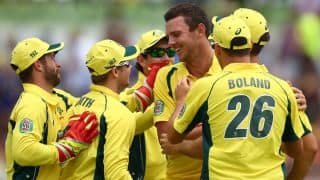