England players Jos Buttler, James Vince, Adil Rashid and David Willey have been named in Mumbai Cricket Association (MCA) XI in the match against England at Brabourne Stadium Mumbai. Mumbai cricketer Shreyas Iyer is leading the MCA XI, which also has a few of his Mumbai teammates Shardul Thakur, Vishal Dabolkar and Nikhil Patil to name a few. England won their previous warm-up match against New Zealand with ease and will be looking to win this match ahead of their tournament opener against West Indies on March 16. MCA XI on the other hand, barring the English players, consist of the team that won the Ranji Trophy 2015-16 for a record 41st time. LIVE CRICKET SCORECARD: England vs Mumbai Cricket Association XI, warm-up match, ICC World T20 2016 at Mumbai

It was perhaps felt that all players will get equal chance to get some practice and hence a few England players decided to play in the MCA XI side. Rashid bowled a magnificent spell against New Zealand in the earlier warm-up match, which helped England sail to a win. England won the World T20 trophy for the first time in 2010. That trophy happens to be the only ICC trophy they have won in their history. READ: Live Cricket Updates England vs MCA XI, ICC World T20 2016 ENG vs MCA XI, warm-up match at Brabourne Stadium, Mumbai

Since the ICC World Cup 2015, where England crashed out in the group stage, they have turned a corner. England have been been excellent in limited-overs fixtures, where they put up good performances in series against Australia, Pakistan and South Africa. But they will want to put up a good show in the this tournament in India and continue their upward surge in the shortest format. 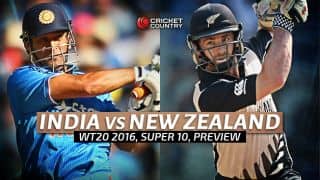