Former World T20 winners, England Women take on Bangladesh Women in Match 4 of T20 World Cup 2016 at Bengaluru. Catch the live streaming of this match on starsports.com and online streaming on hotstar.com. The live score updates will be provided on Cricket Country website. Although English Women are favourites for the day-night clash, they would not want to take the Bangladesh team lightly. This is the fifth ICC Women’s World T20 and it is the first time that it is being held in India. Australia have won the last three tournaments. England won the inaugural season of the World T20 played in front of their own crowd in 2009. LIVE CRICKET SCORECARD: England Women vs Bangladesh Women, T20 Women’s World Cup 2016, Match 4 at Bengaluru

England have appeared in all the four tournaments and have also been runner-up twice in the last two tournaments. England enter the tournament brimming with confidence. The Charlotte Edwards-led side defeated South Africa in the three-match T20I series in February and followed it up with three consecutive wins in their warm-up games (two against New Zealand and one against South Africa). They will be eager to extend their winning momentum in their bid to emulate their 2009 feat. READ: ICC Women’s World T20 2016, Bangladesh vs England: Charlotte Edwards says

For Bangladesh, batting has been their main concern. That they have crossed the 100-run mark only four times in their last 14 outings, and that they have only two wins in those 14 games since March 2014, means that their Achilles heel has been with wielding the bat. Their bowling has been on the mark, but their fielding has not been all that great, and it is imperative that Bangladesh pull up their socks if they are to move into the knock-out phase. 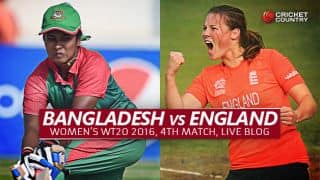