India and New Zealand face off against each other in Match 13 of ICC World T20 2016 at Nagpur on Tuesday. You can catch the live online cricket streaming of the match on star sports. India will be hoping they can break their winless streak against New Zealand in Twenty20 International (T20I) cricket. In five T20Is the two teams have played, the Black Caps have won 4 matches, while the fifth was washed out. This means that India have a 0 per cent win ratio against the Black Caps, which is a stat they will want to change very quickly. You can watch the match live online via streaming. Live Cricket Scorecard: India vs New Zealand, ICC World T20 2016, Match 13 at Nagpur

As reported by ANI, Kiwi skipper Kane Williamson spoke about the importance of spin in the tournament. “We certainly are expecting spin to pay a big part in this tournament. I suppose judging by the warm-up games in Mumbai, they had a bit for the seamers and it swung a little bit. They were very good surfaces but from what cricket we have seen here in Nagpur, spin looks likely to play a big part. It’s important that we adjust our gameplan accordingly.” New Zealand have Mitchell Santner, Ish Sodhi, and Nathan McCullum who can bowl. LIVE CRICKET SCORES & UPDATES: India (IND) vs New Zealand (NZ), T20 World Cup 2016, Match 13 at Nagpur

India’s spin attack comprises of Ravichandran Ashwin, Ravindra Jadeja, Pawan Negi, and Harbhajan Singh, with the addition of the likes of Yuvraj Singh, Suresh Raina, and Rohit Sharma who can be called upon to bowl if needed. India also have the likes of Jasprit Bumrah, Asish Nehra, Hardik Pandya, and Mohammed Shami to lead the pace attack, which makes for an interesting blend. 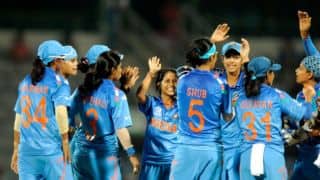