Moeen Ali said it gets little bit easier in terms of your line when bowling on tracks that do not offer much turn.

Mumbai: Contrary to popular belief, England‘s spin bowling all-rounder Moeen Ali says he prefers to bowl on pitches that don’t offer much turn. Ali troubled India with his off spin bowling when Mahendra Singh Dhoni and his men toured there two years ago. “I like to bowl on those pitches that don’t really spin a lot. It is a little bit easier in terms of your line. But when it is spinning, you have more chances of getting wickets. But there you will also leak more runs if it is spinning as much with my style of bowling. “If a person like Ashwin [Ravichandran Ashwin] is spinning, he is still a lot more economical,” said Ali at the team’s open media session here today. ICC T20 World Cup 2016: Ben Stokes says England will approach tournament with aggressive mindset

Ali is one of three slow bowlers in the England squad for the ICC World T20 Championship 2016 that started with the qualifying yesterday. The England all-rounder said his job in the tournament was primarily to contain the run flow and not take wickets. “I have not been here many times. My job will be simple – to contain runs, not get hit for too many boundaries and not look too much wicket-wise. The pitches are very good here and the boundaries are short. My job will be to be very economical. I work on my bowling a lot harder than I used to.” ICC Twenty20 World Cup 2016: England team will be brash and aggressive, says Eoin Morgan

Ali, who will man the spin department with leggie Adil Rashid and left-arm Liam Dawson, still saw himself as a batting all-rounder. “I like to see myself as a batsman even though I am batting at eight. My role in the team is a little different now. So I have to consider what is keeping me in the team. [But] As long as I am playing in the team, it doesn’t really matter where I am batting. In my domestic team, when I first came, I was opening the batting. My role is to go and score quick runs depending on the situation of the game. It’s difficult for me because I am not somebody who goes in and hits the ball out of the ground straightway.”

He did not want to talk much about the success he tasted against a top team like India who play slow bowling well, “That was a while ago. I was a little bit surprised there. I did bowl quite well there in the Test matches, especially during the latter stages. That doesn’t really count for anything now. I am looking for the [fresh] challenge.” He described England as a young and inexperienced side, “Coming to India, in general, is a massive challenge especially, and the T20 World Championship is an even a bigger challenge. So it will be tough. When you have a young team you play differently and with a lot of freedom. [I] hope that can work in our favour on this trip.” 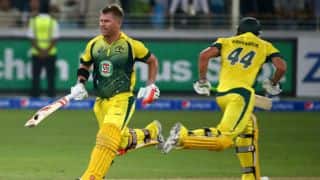 South Africa vs Australia 2015-16: David Warner’s new role of middle-order batsmen can do wonders for visitors