With Pakistan's fixture against India shifted to Eden Gardens from Dharamsala, Rajeev Shukla says Pakistan board should not be concerned about their side's security

A day after Pakistan demanded an assurance from the Indian Government to provide adequate security to their team, senior BCCI functionary Rajeev Shukla on Friday said the board takes the full responsibility of providing fool proof security to all the teams visiting the nation for the World T20. Shukla said that it was the board of the host nation which was responsible for the safety and security of the any team visiting the country. Shukla, who is also the chairman of Indian Premier League (IPL), said that he did not understand the reason behind Pakistan’s concern despite the venue being shifted from Dharamsala to Kolkata.

“I am giving the assurance that full proof security would be provided to them .We are supposed to speak to the concerned state government and to the district administration. We are supposed to provide the security. We will be getting in touch with them. And our entire team is working in coordination with the local administration. So, security and safety will be taken care of,” Shukla told the media here.

“Now, Pakistan should not insist on this particular thing that they want something on writing. That’s between the two governments and I can’t say on that. But I think they should send their team,” he added.

“The BCCI will talk to concerned government, local administration, state government as well as Government of India to provide fool proof security to all the players,” he insisted.

“The Indian Government should give public guarantee of fool proof security to the Pakistan cricket team, if not assured then the team would not be given permission to participate in the World T20,” he said yesterday.

Echoing similar views, Pakistan Cricket Board chairman Shahryar Khan stated that his country’s government is yet to give its approval to the cricket team to travel to India as New Delhi has not yet given assurance on the security front. On Wednesday, the International Cricket Council decided to shift the venue for the World T20 clash between India and Pakistan on March 19 from Dharamsala to Kolkata’s Eden Park due to security concerns.

The decision was taken after Himachal Pradesh Chief Minister Virbhadra Singh expressed his aversion to the Indo-Pak match in his state after the ex-servicemen and families of slain army officials opposed to stage a match involving Pakistan in the wake of the recent Pathankot attacks. 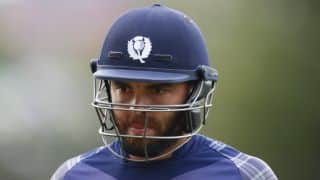 Preston Mommsen frustrated over lack of international cricket for Scotland