Hamilton Masakadza is a part of yet another bizarre run out as Zimbabwe take on Scotland in match 5 of First Round of ICC World T20 2016.

Hamilton Masakadza, is the victim of yet another bizarre run out as, Zimbabwe takes on Scotland in Match No. 5 of  Round 1 of ICC World Twenty20(T20) 2016. This is the second match that Zimbabwe are playing in the mega tournament, their first encounter was with Hong Kong. Though the team bagged a 14-run victory in their series opener, their skipper and most dependable batsman Hamilton Masakadza failed to deliver up to expectations. Their fans were expecting a change of scenario, but Hamilton yet again let them down by getting run out in a weird and freakish way, while injuring his partner Vusimuzi Sibanda in the process. Live Cricket Scorecard: Scotland vs Zimbabwe , Live Score, 5th T20 Match, Group B, ICC T20 World Cup 2016

Zimbabwe won the toss in their second fixture against Scotland, who are coming from a defeat against Afghanistan, and promptly chose to bat. The regular openers came out to bat and started off quite nicely, hitting three boundaries in three overs. Just when the batsmen were looking to be in a good touch, they worsen the situation for their side. In the second ball of the fourth over, impatient Sibanda calls for a single while there was no run at all. As the batsmen started running, fielder fetches it from backward square leg and throws in an attempt to do a run out. Hurriedly running, the batsmen collide. They continue the run as Hamilton get run out by a significant distance while Sibanda makes his ground and went down in pain immediately afterwards.

later in the replay it was revealed that he had injured his chin due to the impact of the collision. In the previous match as well, Hamilton was out in a unique manner as even though he had made his ground, both his feet and bat were in the air while the ball dislodged the bails. 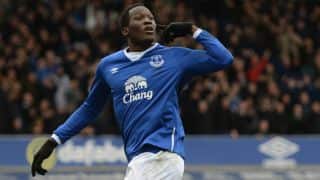 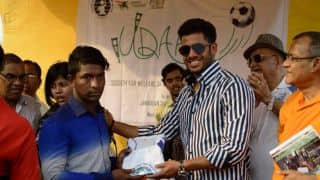