Defending champions Sri Lanka on Tuesday announced two last-minute changes to its World Twenty 20 squad after new selectors were appointed and injury-prone Lasith Malinga was replaced as captain. A panel of selectors headed by former Test player Aravinda de Silva was appointed just hours before the team was due to leave for India. It named Angelo Mathews as skipper and dropped Jeffrey Vandersay and Niroshan Dickwella, replacing them with Lahiru Thirimanne and Suranga Lakmal. Defending champions Sri Lanka said Malinga was stepping down as captain of their World Twenty20 (T20) side Tuesday after the team’s disastrous Asia Cup showing, with Angelo Mathews to skipper the team in India. READ: Sri Lanka’s fiery net session leads to victory against New Zealand

The announcement comes only hours after Sri Lanka’s Sports Minister Dayasiri Jayasekera sacked the panel of selectors and appointed a new line-up headed by former player Aravinda de Silva. “Last night we finalised the new squad and informed the ICC (International Cricket Council). We have appointed Mathews as captain and (Dinesh) Chandimal as vice-captain,” said Jayasekera. “Malinga will be the 15th in the squad,” he told reporters ahead of the team’s departure for India later Tuesday. READ: Suranga Lakmal fined for bowling beamers ICC World Cup 2015 match against England

While Sri Lanka won the last World Twenty20 in Bangladesh in 2014, the team has been badly weakened by the retirements of star batsmen Kumar Sangakkara and Mahela Jayawardene. They are eighth in the T20 rankings and few commentators have given them much hope of successfully defending their title in the sixth edition of the format’s world championship which begins later Tuesday in India. 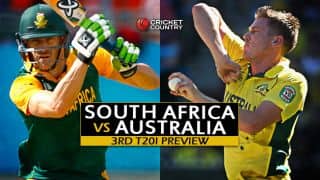