India are the first team to 200 points in the ICC World Test Championship having secured their fourth straight victory in the format.

With their fourth straight win, India have reached 200 points in the ICC World Test Championship table as they continue to maintain the top spot in the standings. On Sunday, after enforcing the follow-on they bowled out South Africa for 189 to record a huge innings win in the three-match series.

With that win, the world’s top-ranked India have taken an unassailable 2-0 lead, winning the Freedom Trophy.

South Africa and West Indies are yet to register a win after having each played two matches so far while Bangladesh and Pakistan are yet to make their championship debut.

India and South Africa will square off again for the third and final Test of the series in Ranchi beginning October 19 and the hosts will hope for a 3-0 clean sweep.

Virat Kohli, leading in his 50th Test, also completed his 30th win as India captain. Only Steve Waugh and Ricky Ponting are ahead of Kohli with 37 and 35 wins respectively after their first 50 Tests as captain. 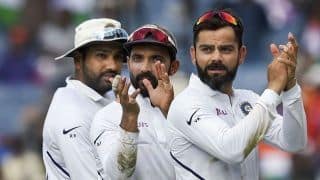 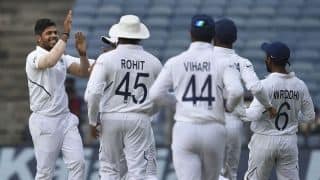