Najam Sethi has termed ICC's decision to dismiss the Pakistan's compensation claim against the BCCI for not honouring a bilateral MoU as "vague and absurd".

Former Pakistan Cricket Board (PCB) chairman Najam Sethi has termed ICC’s decision to dismiss the country’s compensation claim against the BCCI for not honouring a bilateral MoU as “vague and absurd”.

ALSO READ: ‘Premise for compensation from BCCI not conclusive’

Terming the decision a “politically motivated” one, Sethi, who convinced the PCB to file the compensation case against the BCCI, said Pakistan were forced to lose a strong case.

“We’ve pursued the case in the best possible manner. But we also must not forget that India have an extremely strong lobby in the ICC. Even then, this judgment is extremely vague and absurd,” Sethi said.

“I seriously believe that this judgment is politically influenced. India’s strength in ICC is unquestionable at times.”

The ICC had dismissed Pakistan’s compensation claim of around USD 70 million against BCCI earlier this week, saying the MOU signed between the two boards to play six bilateral series is not a legally binding agreement as claimed by the PCB legal team.

According to the MoU, which was signed at the time of the formation of ‘Big Three’ in 2014, both India and Pakistan were due to play six bilateral series between 2015-2023, four of which were supposed to be hosted by Pakistan.

But no series has been played between the two nations till date as the BCCI didn’t get didn’t get clearance from the government.

Sethi, who was the PCB chairman when the case was filed, said nearly 9000 documents were presented in the case but the judgement was made up of just two paragraphs.

“Even in that judgment, there are so many contradictions. First they claimed that PCB’s version was right and if the signed document is viewed with the microscope, then there was a legal binding on the BCCI to fulfill,” he told a television channel.

“On the other hand, they said that if the document is viewed with the telescope, there are many other things involved which needs to be considered and hence the decision should go in the favour of BCCI.”

The former PCB chairman expressed surprise that the ICC committee had even accepted the oral orders of the Indian government as solid and concrete evidence.

“This kind of judgment is shocking to say the least,” Sethi said.

Sethi also said that the PCB took the compensation case to ICC for arbitration and litigation on the advice of top lawyers in the UK and Pakistan. “We knew that India will put pressure on the ICC to give the verdict in their favour, but we were expecting a decision from where things can move forward.

“However, this judgment leaves a bad taste and unfortunately it seems that cricket between the arch-rivals is expected to resume only when India will want to play Pakistan,” he said. 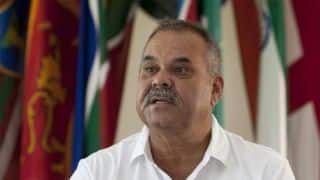