Paine had a look at the Abu Dhabi pitch and refrained from confirming his playing XI after noticing a green top 22-yard strip.

With Usman Khawaja s valiant century coming in nick of time for a fresh look Australia team that denied Pakistan victory in the first Test at Dubai, Australia now are aiming at an elusive Test series win in Asia ahead of the second Test at Abu Dhabi which begins on Tuesday.

Skipper Tim Paine, whose unbeaten 61 off 194 balls saw the first Test end in an epic draw, wants his team to work hard to seal the two-Test series.

“It’d be a massive thing for any Australian side, and for this one, in particular. I touched on it last week that not many people gave us a chance over here, which is a great opportunity for us to prove people wrong and a great thing to keep driving us, Paine was quoted as saying in Cricbuzz on Monday.

“We’re trying to get better every day, and if we manage to play our best next week, maybe that is possible. But we’ve got to turn up for a really tough match, it’s going to last five days and we’ve got to be on for all of those five days and every session.

In the first Test, Australia experienced a batting collapse on Day Three, but Khawaja bailed his team out of trouble with a scintillating 141, his first Test century in Asia.

“Last week when we dropped the ball a little bit for a session, the game can be taken away from you really quickly here. We’ve got to take it, as boring as it is, a day at a time, a session at a time, and if we do that, we know we’ll be right in it at the end,” Paine said.

Asked about any shuffling in the batting order, especially after Travis Head s 72 in Dubai batting at No. 5, Paine said: “Yes, top six will be the same as the last Test. We may consider tweaking the batting order. I know guys had their individual meetings yesterday and all that stuff was discussed.”

Meanwhile, Paine also had a look at the Abu Dhabi pitch on Monday and refrained from confirming his playing XI after noticing a green top 22-yard strip.

“The wicket actually looks a bit different to what we were expecting. There’s a fair bit of grass on it but we’ll come back and take another look later. The square has a lot of grass on it. We might not see as much [reverse swing] which will be good for us and bad for us.

“Looking at it now you would think if that was in Australia you would be playing three fast bowlers. But with the heat around the next 24 hours, I’m sure it’ll change pretty quickly,” he said.

Preparation for the second Test will be toned down in the Aussie camp after a hard-fought first Test. Head coach Justin Langer had said that the team would need to ease out a bit in preparation. Paine too endorsed his coach s theory.

“I think in England one thing I learned was I probably trained too hard and tried too hard. I was getting into games quite mentally worn out I guess. I was using quite a lot of energy even when I wasn’t at the cricket. So, it’s just being able to relax a little bit more and not train as hard,” he said. 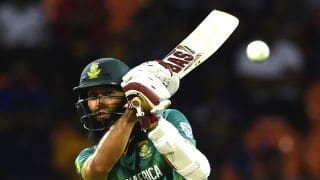