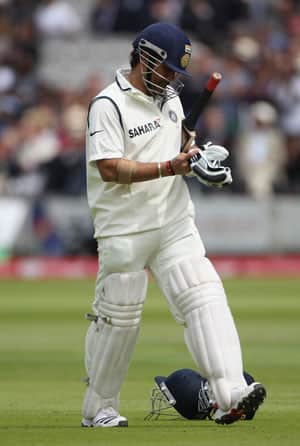 Tendulkar was kept waiting for an unprecedented 100th international hundred after being dismissed for 34 and 12 as England won what was the 2,000th Test of all-time by 196 runs on Monday to go 1-0 up in the four-match series.

‘The Little Master’, whose 51 Test centuries and 48 in one-day internationals are both world records, was rested from India’s recent tour of the West Indies.

Tendulkar, who owns a property near Lord’s, had spent much of the past month practising at the ‘home of cricket’.

But during the course of the first Test he was struck down by a viral infection which forced him to spend most of Sunday’s fourth day off the field and that meant he had to bat out of position in India’s second innings.

“He was much better (Monday) but I wouldn’t say he was like 100 percent fit,” Dhoni said. “But in both innings he really felt it, especially after the first innings when he felt quite weak.

“That was one of the main reasons he didn’t turn up on the field in the first half of the second innings. He’s much better right now but of course not 100 percent.”

But the 38-year-old’s second innings was a far more muted affair, featuring just one four in 85 minutes at the crease.

Tendulkar spent 38 balls on 11 and was then dropped by England captain Andrew Strauss at first slip off James Anderson on 12.

But, two balls later, Anderson nipped one back to have Tendulkar lbw.

“You never want to drop Sachin, put it that way,” said Strauss.

Meanwhile Strauss defended Tendulkar’s batting on Monday by saying: “I am never going to question the way he approaches his innings. He was obviously trying to salvage a draw out of the game for India.

“He tried his hardest to do that and thankfully Jimmy was good enough to get him out lbw.”

Tendulkar’s exit, in what could be his last Test at Lord’s, left him with a modest record at the ground of 195 runs in nine innings, spanning five Tests, at an average of 21.66 with a best of 37 made four years ago.

Both Australia’s Ricky Ponting and now retired West Indies star Brian Lara, the other two great batsmen of the last 20 years, have also failed to make a Test century at Lord’s.

Tendulkar’s next chance to become the first batsman to score 100 international centuries is set to come in the second Test at Trent Bridge in Nottingham, central England, starting on Friday.

Flower asks Panesar not to give Tendulkar net practice