Kohli emphasized on the concept of workload management, adding that it s a term that isn t perceived by many in the right way.

Speaking to the media on the eve of the first Test, Kohli emphasized on the concept of workload management, adding that it s a term that isn t perceived by many in the right way.

“I’m feeling rejuvenated again. It was mental and physical both, because of the intensity at which the tour tours went – South Africa and England,” Kohli said. “People usually talk about workload but they don’t understand the concept. They refer to workload as the number of games played, which is not true. If I get 0 in one game, that is not workload. If I bat for six hours, that is workload. So I think a lot of things are taken in a different way, and people don’t want to go in the detail of what exactly the term means.”

India have been playing cricket non-stop, something that has been highly debated considering the list of injuries sustained by the players. The glaring example was that of Hardik Pandya, who was recently stretchered off the field during India s Asia Cup tie against Pakistan. Even during the India-Bangladesh final, Kedar Jadhav suffered a relapse of the hamstring injury that he had suffered during the IPL, extending India s list of casualties. And although he saw India through, it was another example of how fatigue is catching up with the players.

Even Kohli, considered one of the fittest players, has lately been troubled by back spasms, one that took place in South Africa and resurfaced in England after the second Test at Lord s.

“You saw when Hardik broke down, people did not anticipate that so from the outside you can never say what the person is like from the inside,” added the Indian captain. “So I definitely needed the break because my back troubled me once in South Africa and then again in England. Looking at the World Cup, I think these things are very important to consider, to given players ample rest and opportunity to train well and come back stronger.”

The BCCI on Wednesday, announced India s 12-member team for the first Test, which will see 18-year-old batsman Prithvi Shaw make his debut, making him the 293rd player to represent India in the format. Kohli welcomed BCCI s move of granting youngsters like Shaw and Mayank Agarwal their opportunity with the Indian team.

The inclusion of Shaw means that once again India will go into a Test match without an unchanged side, which has been a trend in Kohli s captaincy. His policy of excessive chopping and changing may have been criticized by many but Kohli emphasized that the reason behind that has to do with getting the best 11 players to represent the team.

“You need your best XI on the field. There is no doubt about that. In the past, most of the changes that we’ve made have been in the bowling combination, and people have very conveniently taken that otherwise,” Kohli said. “The bowlers that have sat out have never felt like they’ve been hard done or felt that it’s been unfair, because the motive has been to bring the best XI in the park. And we have hardly tinkered in the batting order apart from a couple of guys not being in form here and there.

“And we have utilised the conditions, wherever we have gone and played people who are suited for those conditions. The batting has not been up to the mark and that is why we haven’t been able to win in South Africa and England but our bowling combinations have definitely worked. We have taken 10 wickets almost everytime.” 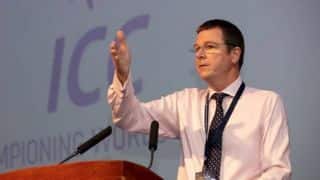