Imran married Bushra Bibi in a simple ceremony held in Lahore on Sunday.

Lahore: Pakistani cricketer-turned- politician Imran Khan has tied the knot for the third time with his ‘spiritual guide’, his party has confirmed, ending weeks of speculation. Pakistan Tehreek-i-Insaf spokesperson Fawad Chaudhary said the 65-year old party chief married Bushra Maneka, a “respected Pir” (faith healer) in Pakpattan, in a simple ceremony in Lahore on Sunday. The ceremony was held at the residence of Bushra’s brother and PTI Central Executive Committee member Mufti Muhammad Saeed performed the ‘nikah’, he said in a late-night tweet.

“The valima ceremony will also be held in a simple manner in a few days,” he said. Bushra, also known as ‘Pinky Pir’, is in her late 40s and has five children from her first marriage. Earlier, she was married to a senior customs official in Islamabad but parted ways in recent times. She is a resident of Pakpatan district, some 250 km from Lahore, which is known for the shrine of Baba Farid Ganj Shakar. Khan has previously referred to Bushra as his “spiritual adviser” and someone whose guidance he valued.

The party’s media wing last night also released a few pictures of the wedding ceremony which was attended by Khan’s mother-in law and other family members. Khan’s sisters were not present in the ceremony triggering rumours that he had not taken them into confidence about his third marriage. Khan’s previous two marriages ended in divorce. His first marriage was with Jemima Goldsmith, daughter of a British billionaire, in 1995, which lasted nine years. Khan has two sons from her.

His second marriage with TV anchor Reham Khan in 2015 ended after a brief 10 months. Rumours about Khan’s third marriage started circulating in January. However, he had rejected media reports that he had secretly married Bushra on January 1. He said that he had only sent a wedding proposal to her and was awaiting her response. Khan said that she had sought some time to consult her family, especially her children, before making any decision. A source in the party said Khan was under immense pressure from the party to disclose his third marriage after a humiliating defeat in Punjab’s Lodhran district last week.

“The PTI leadership was of the view that strong rumours about his third marriage had played a role in the defeat of the party’s strong man Jahangir Tareen’s son at the hands of a candidate of ruling PML-N,” he said.”Khan was advised to disclose his marriage as early as possible because the general elections are not far away and the PTI may suffer more politically if this news was broken just before the polls,” he said. According to sources, Khan had started visiting Bushra over a year ago to seek spiritual advice.

“He got closer to her when some of political predictions she made about his party came true. Later, both developed some intimacy and finally Bushra took divorce from her husband and contracted marriage with Imran early last month,” the sources said. Last month, Khan had admitted that he had proposed marriage to her.

“I would like to reiterate that every time I met her, with family and alone, she has been in purdah (veil). My interest in her lies in the fact that I have not seen or met anyone with her level of spirituality. I only sent the proposal for marriage after she divorced her husband,” Khan has said. 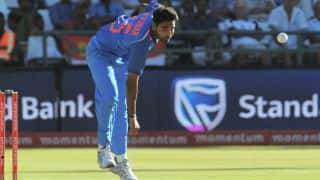 Bhuvneshwar Kumar gave us nothing to score off, says Reeza Hendricks after 1st T20I loss 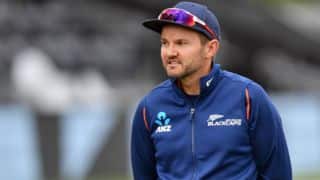