Imran Tahir has been subjected to racial abuse even during the ICC World Cup 2015 at Manuka Oval.

Imran Tahir was subjected to racial abuse during the fourth ODI between India and South Africa. The incident sparked when a spectator accused Tahir for misbehaving with a child. Although Tahir denied of any such claims, an unknown family continued to bash Tahir. They even took the matter to the security officials. Tahir as well addressed the matter to the stadium security, and was subsequently accompanied by two security personnel. The unknown family was evicted from the stadium, thereafter.

CSA on Monday released a statement on the incident, in which it was mentioned, “Imran Tahir was verbally and racially abused by an unknown man during the fourth One-Day International (ODI) against India at the Bidvest Wanderers Stadium on Saturday. Tahir reported the incident to the stadium security, and was subsequently accompanied by two security personnel to identify and to have the man ejected from the stadium. Tahir made no physical contact with the offender or any of the children in the vicinity. The incident is under investigation with the CSA and stadium security teams.

“In accordance with the ICC Anti-racism code, spectators who engage in racist conduct are to be ejected from the stadium and can face further sanctions and criminal prosecution.”

This is not the first time Tahir has been targeted for racial abuse. During ICC World Cup 2015, the fans had a run in with Tahir. 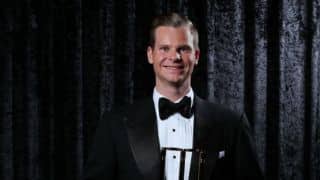