Bangladesh batsmen, in the form of opener, Imrul Kayes and Mominul Haque scored their respective half-centuries to ensure Bangladesh stayed at top on Day 1, in the first of the two-match Test series against Pakistan, at the Sheikh Abu Naser Stadium in Khulna on Tuesday.

Earlier, Bangladesh skipper, Mushfiqur Rahim won the toss and elected to bat first on a flat batting track at Khulna. Bangladesh had two debutantes in the form of Soumya Sarkar, Mohammad Shahid and Sami Aslam. Pakistan, on the other hand, dropped their start leg-spinner, Saeed Ajmal. Bangladesh lost the only wicket of opener, Tamim Iqbal as they finished on 60 for the loss of a wicket at lunch, while at tea, they were 150 for the loss of two, losing Imrul Kayes for 51.

During the first session, Bangladesh openers, Tamim and Imrul continued to bat sensibly and slow following the early call as the bowlers in the form of Wahab Riaz, Mohammad Hafeez, Zulfiqar Babar and Yasir Shah continued to bowl in good line and length. However, just when this pair seemed to be going strong, leg-spinner Yasir delivered the first break-through for Pakistan after Tamim was caught by Azhar Ali at short leg.

During the post-lunch session, Kayes scored his second Test half-century, with six boundaries along with a strike-rate of 39.23 in 129 deliveries. However, the next ball off Mohammad Haffez was caught by the bowler himself, and barely after scoring his knock, he was on his way back to the pavilion.

The post-tea session began on a good note as Mominul scored his eighth half-century in Test cricket, off 108 deliveries including four boundaries along with a strike-rate of 46.29. Even Mahmudullah was going strong, and just when it seemed he would reach his half-century as well, he was dismissed unfortunately on 49 by Wahab Riaz after being edged to the keeper. Both put-up a 95-run stand for the third wicket.

Following his dismissal, it was the pair of Mominul and Shakib Al Hasan, who took charge of almost rest of the session. They brought up the 200 for Bangladesh as well. However, it was in the last over of the day, when Mominul was trapped leg-before to Zulfiqar Babar and was dismissed for 80, as they end of day’s play was announced. 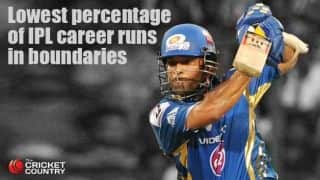