Kayes had injured his thigh during the one-off Test against India last year.

Bangladesh have been in good nick in the tri-series against Zimbabwe and Sri Lanka winning all the matches so far. They have also made some experiments with their batting order by pulling Shakib Al Hasan to the top, which has worked wonders. Shakib even slammed a fifty in the match against Sri Lanka on Friday. However, it has been a concern for Bangladesh s regular opener Imrul Kayes. During the training session ahead of the tri-series, Kayes had incurred finger injury.

Kayes had previously injured his thigh during the one-off Test against India last year. Keeping in mind the history of Kayes and his injuries, also the upcoming Sri Lanka tour, Bangladesh team management has decided to omit Kayes from the tri-series squad. Kayes has played just 5 ODIs last year off which he scored 125 runs at 25 with a fifty to his name. As for Tests, Kayes has scored 189 runs from 6 matches at 17.18.

The tri-series will end by January 27 and the Sri Lanka series will go underway from January 31. Bangladesh will also play two T20Is against Sri Lanka on February 15 and 18. 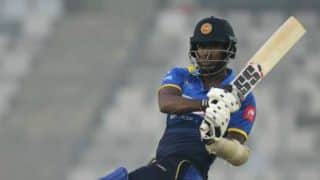