Currently, Bangladesh are 39 for the loss of two wickets in nine overs with Soumya Sarkar on one.

Bangladesh opener, Imrul Kayes was unfortunately run out by Ravindra Jadeja after a huge mix-up and miscommunication with the new incoming batsman, Soumya Sarkar, during their chase against defending champions, India, in the 2nd quarter-final of the ICC Cricket World Cup 2015 at the Melbourne Cricket Ground (MCG) in Melbourne on Thursday. Currently, Bangladesh are 39 for the loss of two wickets in nine overs with Soumya Sarkar on one and Mahmudullah on four. Live Cricket Updates and Commentary: India vs Bangladesh, ICC Cricket World Cup 2015 Quarter-final 2 at Melbourne 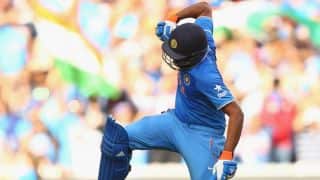