In Pictures: Virat Kohli, Rohit Sharma, MS Dhoni having fun at the airport

In Pictures: Virat Kohli, Rohit Sharma, MS Dhoni having fun at the airport

Virat Kohli also shared a photo of players in the flight with caption "Off we go, UK bound!"

The Indian team are off to their long tour of England, scheduled to start July 3. Before the England tour India will play 2 T20Is in Ireland. India will play then 5 Tests, 3 ODIs and 3 T20Is in England. The team that has left for the UK tour had some fun at the airport. The official account of BCCI shared the photos through their Twitter account. Virat Kohli also shared a photo of players in the flight with caption “Off we go, UK bound!”

Little Radha wanted a picture with #TeamIndia captain @imVkohli and the smile on her face tells the story. pic.twitter.com/FTOPrNFu27

India will miss the service Ambati Rayudu, who has failed the Yo-Yo test. Suresh Raina has replaced him. Meanwhile, Kohli, who had injured his neck during IPL, revealed that he is all fit for the series in a press conference: “I am 100% ready to go. The neck is fine now. I’ve had six to seven sessions in Mumbai. I’ve had a good practice and I am absolutely ready to go. I went through the fitness test as well so the body is feeling fine.” 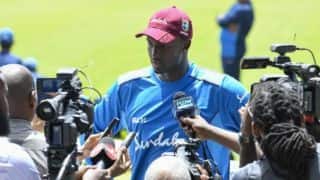 Jason Holder thinks the Barbados pitch will be 'truly Caribbean'