It wouldn't be an overstatement to say that among all top-order batsman across both sides, Rohit looked the most comfortable and till his dismissal.

Rohit Sharma’s indiscreet shot selection pegged India back after rookie bowling attack restricted Australia to 369 on a rain-curtailed second day of the fourth Test on Saturday. Rohit was elegant as ever in his 44 off 74 balls before Australia’s off-spinner Nathan Lyon in his 100th Test enticed him to come down the track but the half-chip-half-loft was safely pouched by Mitchell Starc in the deep. Furious with Rohit’s shot selection – former India captain Sunil Gavaskar questioned senior batsman’s tactics on Day 2 of the Brisbane Test. The India opener was beaten in flight by Lyon and ballooned a simple catch to Starc.

After his dismissal, the 71-year-old Gavaskar, on air for Channel 7 Cricket, questioned the ‘irresponsible shot’ from ‘senior’ batsman Rohit. “Why? Why? Why? That’s an unbelievable shot. That’s an irresponsible shot. There’s a fielder there at long on, there is a fielder there at square leg. You’ve just hit a boundary a couple of deliveries earlier, why would you play that shot? You’re a senior player, there’s no excuse, absolutely no excuse for this shot,” Gavaskar said on air during Day 2 of the Gabba Test.

India also lost Shubman Gill – 7 – who edged one off Pat Cummins to Steve Smith. Cheteshwar Pujara (8) and Ajinkya Rahane (2) added only two runs in the 6.1 overs before the break.

There were six boundaries from Rohit but he did not fiddle at deliveries in and around the off-stump channel even as Cummins and Josh Hazlewood bowled a testing spell under overcast conditions.

The shot of the session was an on-drive off Cummins which came after a streaky boundary through the slips in the same over. Another delightful stroke was an off-drive off Cameron Green as 49 runs were added for the second wicket.

There wasn’t many swings on offer but the pace off the track has increased compared to the first day and it only helped that the Australian pace attack is a more well built one with average speed being at least 6-7 kmph more than their Indian counterparts.

It wouldn’t be an overstatement to say that among all top-order batsman across both sides, Rohit looked the most comfortable and till his dismissal never looked like being troubled by the four-pronged attack. 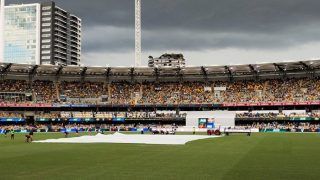 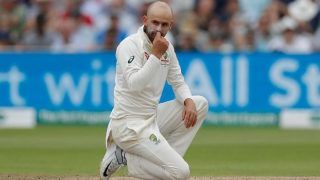