Gavaskar said he was surprised over the controversy regarding a concussion sub allowed to India during their victory in the 1st T20I against Australia in Canberra on Friday.

Indian batting legend Sunil Gavaskar finds nothing wrong in Yuzvendra Chahal coming on as a ‘concussion substitute’ for Ravindra Jadeja in the first T20I between India and Australia at the Manuka Oval on Friday. Gavaskar said he was surprised by the noise over the controversy regarding the substitute as the decision was approved by the match referee David Boon. However, the batting maestro himself doesn’t like the concept of teams being provided a cushion for a batsman’s inability to face bouncers.

Chahal replaced Jadeja, who got hit on the head, in the first T20 International and did a star turn with figures of 3 for 25 in the Indian cricket team’s 11-run victory in Canberra.

“First and foremost let me say that match referee is a former Australian cricketer David Boon. He was okay with Chahal substituting for Jadeja. They normally say like-for-like and Chahal is not an all-rounder but if he goes out with the bat whether it’s one run or 100 run, he is an all-rounder,” Gavaskar was quoted by India Today.

“An Australian match referee had no objection to that. So I don’t see why there is so much of noise about it.”

One of the greatest batsmen to have played the game, the 71-year-old Gavaskar however doesn’t endorse the concept as he feels it is a leverage given to batters for a technical deficiency.

“On the business of concussion substitute itself, I don’t agree with it. May be I am old fashioned and I have always believed that if you are not good enough to play the bouncer and get hit on the helmet, then you don’t deserve a substitute. I am sorry,” Gavaskar said, forthright in his observation.

Australia coach Justin Langer was seen indulging in a heated discussion with match referee David Boon after he was informed about the change during the changeover in 1st T20I in Canberra.

India have taken a 1-0 lead over Australia in the three-match series. The two teams will meet again on Sunday at the Sydney Cricket Ground. 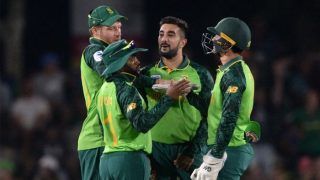 AUS vs IND 2nd T20I: Yuzvendra Chahal Could Surpass Jasprit Bumrah's Record For Most Wickets in T20Is in SCG