Jadeja sustained a hamstring injury - and concussion - in the first T20I in Canberra, and has since been sitting on the sidelines, vying to recover and make a comeback in India's playing XI.

Going by the latest reports, all-rounder Ravindra Jadeja might make his comeback, if fit, from injury in the second Test against Australia in Melbourne, starting on December 26. Jadeja, who had suffered a hamstring injury and concussion during the first T20I against the hosts, was ruled out of the remaining two white-ball games. The Indian team management will be keenly monitoring Jadeja’s progress leading up to the Boxing Day Test against Australia. Jadeja might replace India’s ‘away specialist’ Hanuma Vihari in India playing XI. Vihari scored 16 and 9 in the first Test, but the decision is believed to be tactical, to add more balance.

Over the past few days when India were playing the Test match, the 32-yaer-old Jadeja has slowly returned to the nets. It has been learnt that the senior all-rounder is recovering well but it can’t be said with certainty that he will be 100 percent fit for the second Test in Melbourne starting on December 26.

But if fit, the axe will fall on Andhra Pradesh batsman Vihari, not because of his low scores in the Adelaide Test but purely based on the best combination that Ajinkya Rahane and Ravi Shastri can put on the field.

“If Jadeja gets fit to bowl long spells, then there is no debate at all. Jadeja replaces Vihari on the basis of his all-round skills. Also it gives us an option to play five bowlers at the MCG,” a senior BCCI source was quoted by PTI.

Jadeja has 1869 runs in 49 Tests at an average of 35 plus which includes a hundred and 14 fifties. He has struck half-centuries in both England Australia on previous tours.

On the other hand, Vihari, in his 10 Tests, has scored 576 runs with a hundred against West Indies and four half-centuries at an average of 33 plus.

There is a school of thought that if pure batting skills are taken into account, then there is not much of a difference between “specialist Vihari” and “all-rounder Jadeja”.

With Mohammed Shami already ruled out of the series because of a wrist fracture, India might just be tempted to go in with five specialist bowlers instead of the usual four, which has been their template for years.

The Indian team had a scheduled practice session at the Adelaide Oval on Monday but due to steady rain, it had to be cancelled.

With skipper Virat Kohli set to leave for India on Tuesday and the squad travelling to Melbourne, the skipper apparently had a chat with his team on the way forward after the 36 all-out debacle in Adelaide. 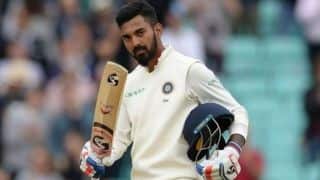