Natarajan's dream journey in cricket took another huge step forward as he was handed the India Test cap in the fourth and final Test against Australia in Brisbane.

With India’s first-choice fast bowlers – Ishant Sharma, Jasprit Bumrah, Mohammed Shami, and Umesh Yadav – all missing out due to injuries, T Natarajan made his debut in the longest format for India in the fourth and final Test against Australia at The Gabba, Brisbane. From playing tennis ball cricket in Tamil Nadu, Natarajan’s dream journey of representing India in all formats – T20Is, ODIs, and Test cricket took another major leap on Friday when he received his debut cap by bowling coach Bharat Arun.

The 29-year-old was included in the Indian team after a terrific season with Sunrisers Hyderabad in the Indian Premier League 2020 edition. He replaced mystery spinner Varun Chakravarthy who missed out due to an injury. Natarajan also becomes the first Indian player to make debuts in all three formats on the same tour. He is the 17th player overall to do so. Natarajan becomes the second India player to do so after Bhuvneshwwar Kumar in the same season. Here’s how the Twitterverse responded on Natarajan’s debut:

The stuff dreams are made of. A perfect treble for @Natarajan_91 as he is presented with #TeamIndia‘s Test ? No. 300. It can’t get any better! Natu is now an all-format player. #AUSvIND pic.twitter.com/cLYVBMGfFM

You can call it fairytale, dream run or whatever but it is truly inspirational for many(not just in cricket).#Natarajan deserves all of it as he has worked hard and grabbed all his opportunities!#AUSvIND

What a ride for @Natarajan_91 …he deserves this one more than anybody..if he can replicate his white-ball form at The Gabba, he will be the toast of the nation #GabbaTest #natarajan #INDvsAUS #INDvAUS #AUSvINDtest

So, no Ishant, no Bumrah, no Shami, no Yadav, no Ashwin, no Jadeja. Siraj with 2 tests behind him is the most experienced Indian bowler. Total experience Siraj (2), Saini (1), Shardul (11 balls). This is surreal and unprecedented

#Natarajan‘s is a heartwarming story of sacrifice, patriotism and desire. Meeting his newborn daughter in a week’s time will surely be sweeter after a Test debut. #AUSvIND

Meanwhile, Natarajan’s Tamil Nadu teammate and all-rounder Washington Sundar also made his Test debut on Friday. He was handed the 301st Test cap by Ravichandran Ashwin, who misses out due to a stiff back.

Australia reached 65 for 2 at lunch on the opening day of the fourth and final Test as a new-look Indian bowling line-up kept it steady. The visitors removed openers David Warner and Marcus Harris in first session at The Gabba.

With a cumulative experience of three Test matches and ’10 balls’ that Shardul Thakur bowled on his debut in 2018, India did well, although Steve Smith (30 batting, 55 balls) and Marnus Labuschagne (19 batting, 82 balls) were once again looking ominous on a bouncy and batting track.

However, Mohammed Siraj – 18/1 – and Shardul Thakur – 1/27 – did well to get rid of the openers in the first hour of play where honours were shared. That Australia forced a half-fit Warner (1) to play was evident when he had no apparent footwork while trying to drive an angular delivery from Siraj which was brilliantly snapped by an agile Rohit Sharma diving to his right.

It could be seen that Warner, after his groin injury, is still finding it difficult to stretch his front-foot and get to the pitch of the delivery.

Thakur, whose debut against West Indies ended in a nightmare after bowling only 10 deliveries, achieved success, bowling the 11th one in Test arena.

It was a gentle outswing — an inswing for left-handed Harris (5), who instinctively clipped it straight to debutant Washington Sundar at square leg.

However, Smith and Labuschagne, two of Australia’s best batsmen, then took control of the proceedings with a 48-run partnership.

Smith, for one, was ready to punish the loose deliveries as he hit as many as five boundaries while Labuschagne did a ‘Cheteshwar Pujara’, holding one end up. 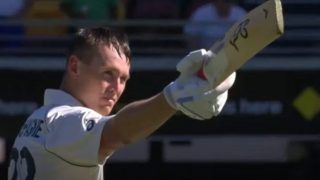